By Manly Bryant on February 5, 2021
Advertisement 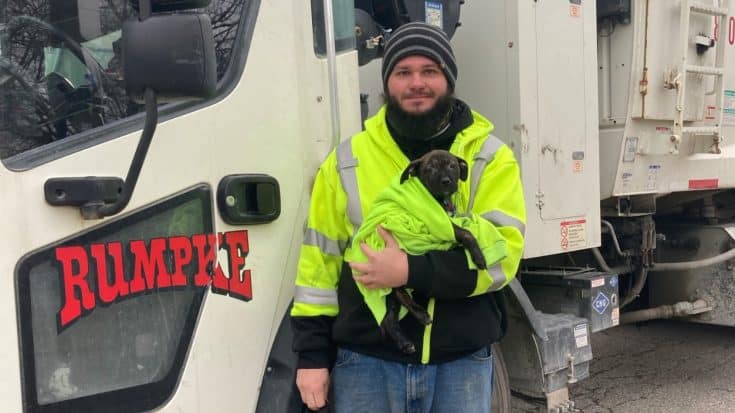 Aaron Kinsel is a truck driver working for the Rumpke Waste & Recycling and something caught his eye one morning as he gathered trash bins on the side of the road.

A Rumpke driver is a hero after saving a puppy this morning. Aaron Kinsel was servicing customers when he noticed movement from a discarded backpack. When he opened the backpack, he discovered a 10wk old puppy. Rumpke team members are currently getting the puppy veterinary care. pic.twitter.com/ReVA1DUZjL

Driving a route outside of Cincinnati in Colerain Township, Aaron found a backpack discarded on the side of the road and something was moving in it. When he walked over to investigate, he found a 10-week-old puppy inside the bag and pulled it out.

Aaron said that he was “meant to find her,” according to the Animal Rescue Site.

UPDATE: Here is the latest on the Rumpke Waste & Recycling driver and the puppy he saved on Wednesday morning in Colerain Township just outside of Cincinnati https://t.co/rbR4lCdKHK pic.twitter.com/mbb7rzMAHn

The pup was taken to a veterinarian and discovered to be a female boxer suffering from dehydration and a broken leg. She needed expensive surgery or her leg would be amputated and at this point, Rumpke decided to pay the vet bills to have her properly taken care of. The waste company was honored to make her a member of the team and Aaron named her Tipper.

After speaking with the veterinarians, they advised them to amputate her leg to prevent future issues that could be the side effect of a surgery to save the leg. Rumpke ultimately decided to take the professional’s advice and shared an update about Tipper on Twitter.

UPDATE: Tipper had surgery today to amputate her rear leg that was broken in two places. The surgery went well and she is currently recovering at the veterinarian office. Aaron’s family is excited to get her home, which will hopefully happen next week. pic.twitter.com/EghMjcdVSJ

Tipper is expected to make a full recovery and, hopefully, live a long and happy life with Aaron and Rumpke Waste & Recycling. There are other touching stories about people finding animals in the trash and one that stands out is a utility worker who found a cat sealed up in a bag at a garbage processing plant and saved it. Take a look at video footage of that below.