By Jennifer Pernicano on September 17, 2018
Advertisement 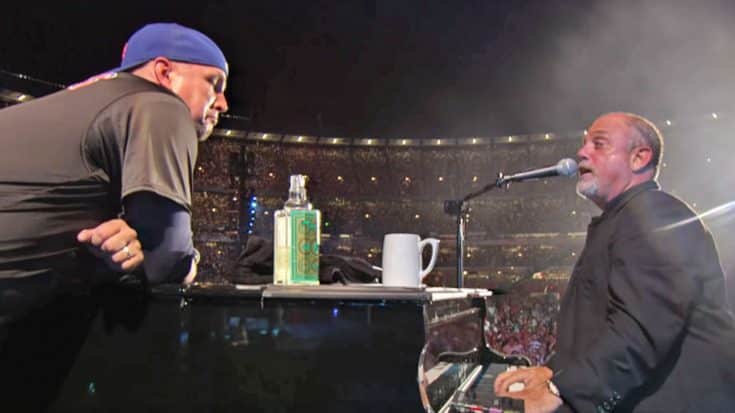 In a way to commemorate the closing of the New York Mets ballpark, Shea Stadium, Billy Joel played the historic landmark over the course of two nights. He performed some of his biggest hits and surprised his sold-out audiences with incredible guest performances. One of his surprise musical guests at the famed 2008 concerts was country star Garth Brooks.

While their music is vastly different, they do have one thing in common – the song “Shameless.”

Depending on which genre you prefer, you may know that both Joel and Brooks have a song called “Shameless,” Joel originally writing and releasing it in 1989 for his album Storm Front, and Brooks releasing his on his 1991 album Ropin’ The Wind.

Together, on the stage at Shea Stadium, Brooks and Joel united to sing “Shameless” together for the very first time.

Brooks rocked the lead vocals as Joel accompanied him with his stellar harmonies and mesmerizing piano skills. The collaboration between the two not only stuck true to Brooks’ original tempo, but also incorporated rock elements that sent the song to new musical heights!

As the song continued, Brooks approached Joel’s piano and basked into the pianist’s vocals as he proudly sang the heart-wrenching hit song. Needless to say, fans were awestruck at the star power!

When he was writing the now-hit song, Joel was inspired by one of his idols, Jimi Hendrix.

“When I wrote the song ‘Shameless,’ I thought I was Jimi Hendrix. Jimi Hendrix was always chewing gum when he was singing,” Joel said to a 1995 Germany crowd, mimicking a gum smacking sound.

At another concert in Boston, he told the crowd, “I wanted to write a song, like a Jimi Hendrix song.”

So, whether you are a country fan or a rock fan, you have Jimi Hendrix to thank for the incredible song “Shameless.”

Check out Joel and Brooks’ performance of “Shameless” below.