By Jennifer Pernicano on February 15, 2022
Advertisement 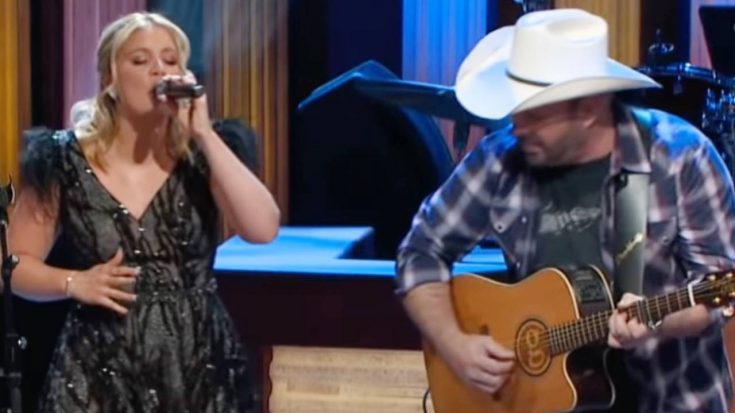 During a Christmas show at the Grand Ole Opry, Lauren Alaina was surprised by her biggest hero, Trisha Yearwood, with an invitation to become a member of the Opry. Alaina, of course, accepted!

Her official induction ceremony was set for February 12 and included performances by Lauren Alaina herself, along with Lorrie Morgan, and Wendy Moten. The ceremony was hosted by Bobby Bones.

After a special message from Dolly Parton, which can be viewed below, Alaina took the stage with Trisha Yearwood to perform a duet to one of Alaina’s favorite songs, “Walkaway Joe.”

Yearwood introduced the song saying, “Lauren texted me this afternoon, about 3:45, and said, ‘Is that the key that the original is in? Because I feel like it’s lower.'”

Yearwood realized it was the wrong key, and that the band had re-learned the song in the completely wrong key!

“I thought, if it was okay with you,” Yearwood continued. “I brought my guitar player and I thought maybe we could do it acoustically. It’s not Johnny, you all know Johnny, but i t’s not him. Ladies and gentlemen, Garth Brooks.”

Immediately, the crowd went wild and Alaina’s reaction was priceless! Her jaw dropped and she could not believe Brooks was surprising her! Brooks walked on stage, kissed his wife, and bowed down to Alaina, who did a cute curtsey.

Yearwood sang the opening lyrics to her early 90s hit with her husband accompanying her on guitar. Alaina was still speechless and made hilarious faces while the two were performing. She almost forgot to start singing!

After the performance, Yearwood and Alaina shared a hug and made a joke about Trisha saying Garth was “just a guitar player.” Not only did Alaina and the live audience freak out over Brooks’ surprise appearance, so did fans watching from home. See some of their reactions below.

“How many people can say that Garth Brooks played guitar for their debut as an Opry member?! SO COOL!!!”

“They’ve definitely made this a memorable night for her!”

Watch the epic surprise below.