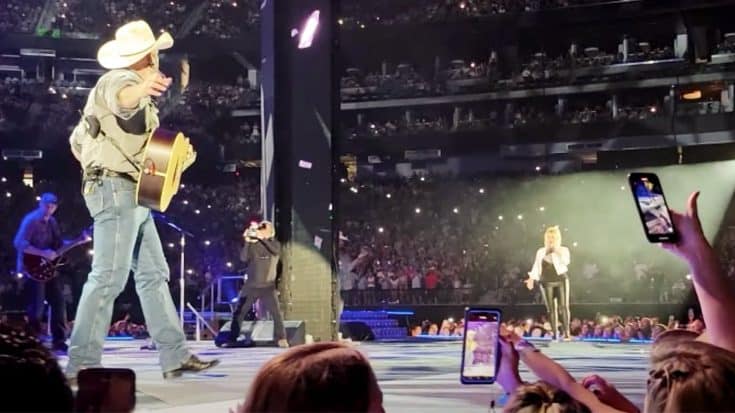 Just like everyone else, Garth Brooks was unable to perform live for most of 2020. His last concert was on February 22, 2020 at Detroit’s Ford Field.

While everyone was stuck at home, Brooks and his wife, Trisha Yearwood, entertained fans with concerts streamed live from their home studio. During one of those concerts, they delivered a cover of the popular duet “Shallow,” which was sung by Lady Gaga and Bradley Cooper in the movie A Star is Born.

Brooks and Yearwood eventually recorded their version of “Shallow” and released it with Brooks’ album, Fun, in November.

Now, artists are slowly revamping their tours and have started performing for live audiences once more. Brooks’ first tour stop of 2021 was in Las Vegas on July 10. He became the first country artist to perform at Allegiant Stadium, and sang for a sold-out crowd.

Since it was his first show back after such a long time spent at home, Brooks wanted to make it a night his fans would never forget. He pulled out all the stops to make it a special experience.

In a surprise moment, Brooks welcomed Yearwood to the stage so she could join him to sing “Shallow.” Her appearance had been unannounced, so the fans went wild when they saw her!

If you weren’t one of the lucky people who got the chance to attend Brooks’ Las Vegas show, don’t dismay. One spectator filmed him and Yearwood singing “Shallow” and uploaded their performance on YouTube. Watch it below.

What a way to come back after a long year of basically no live music!