By Jennifer Pernicano on January 16, 2019
Advertisement 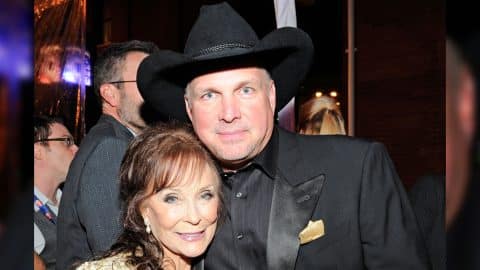 On Jan 15, 2018, it was announced that some of the biggest and most legendary names in country music are going to pay tribute Loretta Lynn in a huge way on April 1st that year. In honor of her 87th birthday just a couple weeks later, singers like Garth Brooks, George Strait, Alan Jackson, and so many more would be taking the stage at Bridgestone Arena in Nashville to take part in this once in a lifetime event honoring the Coal Miner’s Daughter herself.

Can you believe it! So excited to see everyone! ANNOUNCEMENT: AEG Presents Loretta Lynn Official: An All-Star Birthday…

Lynn was on hand for the announcement of the huge event, which was broadcasted live on the Grand Ole Opry’s Facebook page. The country legend was seated on stage to reveal the big news, and later joined by Brooks! After a few minutes of Q&A from the audience, Brooks told a story that hardly anyone has heard before – and revealed that they went on a date a number of years ago!

“When I was lucky enough to be talking about being her date for the Lifetime Achievement Award for the Grammys at the Ryman, I’d never performed at the Ryman before,” he said. “We got to perform ‘After the Fire is Gone.’ So when I asked her if it’s going to be a date, I said, ‘You want a limousine or you want a truck?’ She said ‘Truck.’ Right there I knew I was going to be at home. It was going to be fun.”

“She walked right up to the driver’s door. Oh, my gosh. This is right out of Oklahoma, where I grew up,” Brooks said. “I opened the door. She jumped in, scooted over and sat right in the middle. And I’m driving, going, ‘This is Loretta Lynn, and I have her on my arm!’ The whole trip there. We get out, I get out, and that truck still has so much glitter. You can clean it a hundred times. It’s still got glitter in the seats, glitter on the floorboard. It’s my favorite part.“

“Well, I had to glitter up!” Lynn interrupted.

Brooks continued praising Lynn for her role as a pioneer for women in country music.

“She is a pioneer … because a pioneer never stops being a pioneer, and that definitely defines this woman,” he explains. “Especially in this day and time, where women notably have to work a thousand times harder to get a tenth as much as guys do. I’m married to one of those women [Trisha Yearwood].”

We loved hearing this story about their date! Since Brooks and Yearwood married in 2005, she had to have given her blessing to share her husband with the Coal Miner’s Daughter! Who wouldn’t?

Watch a clip of their “After The Fire Is Gone” duet from their date night below.