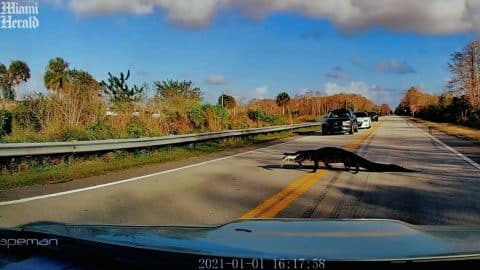 The Miami Herald reported that Christopher Borges was driving down the Tamiami Trail near the Big Cypress Oasis Visitor Center in Ochopee, Florida when he filmed an amazing encounter with wildlife.

“Traffic had stopped from way down the road and the gator was lying down when I pulled up,” Christopher told Miami Herald. “I had never seen one up that close before. It was pretty incredible.”

Christopher’s dashcam was recording when he pulled up to the scene and traffic was stopping due to an alligator laying partially on the road. It also had a large bird in its mouth that was probably roadkill and the reason the gator was in the road in the first place.

The gator wasn’t moving so Christopher decided to drive around it and the gator reacted by fully moving its body onto the road and blocking traffic even more. Then, gradually and leisurely, the gator made its way across the road and made the cars wait.

It happened on New Year’s Day (2021) around 3:30pm while Christopher was driving east from his home on Marco Island. Fortunately, no one was hurt, and the public gets to see a video they can observe wildlife and learn from it.

Alligator Crossing The Road Video Below