By Manly Bryant on September 3, 2019
Advertisement 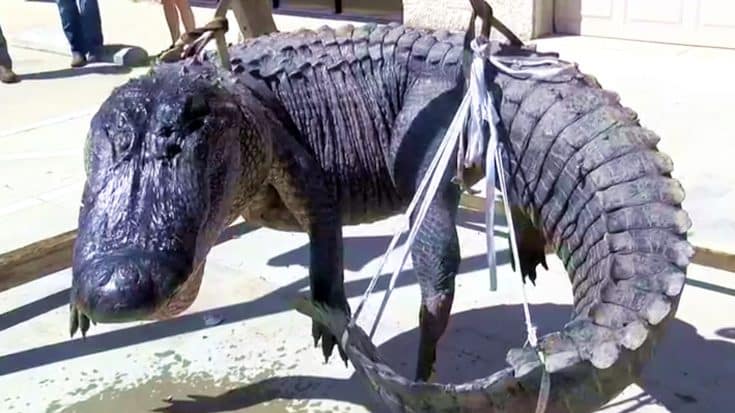 Calling this disturbingly-large alligator a “once-in-a-lifetime” kill, Mississippi alligator hunting season opened to the news of a record kill made by hunting team the Muddy Water Maniacs.

According to a new report by WAFB 9, the team went out this Labor Day weekend in hopes of catching a giant gator they’d been hoping for over the last couple of years.

Well, as it turns out, their dreams came true! At around 5:15 a.m. on Labor Day morning, these fellas snagged one of the largest in recent history – tipping the scale at a massive 700 pounds and measuring 12 feet, 7.5 inches long.

The gator would have been longer, but it appears he lost about six inches of his tail in a previous accident or fight out in the waters as the nub was healed over and looked quite old.

The team bagged this big boy in the southwest zone on the Mississippi River, and the teammates described the harvest as “a battle.”

“It was a battle,” said member Stephen Brady. “Took us a while to get him in, about an hour-and-a-half I guess. He fought, we fought, we got him in. Little disappointed on the weight, but still he’s a great gator and I’m happy to have him.”

Muddy Water Maniacs also have the record for length with a 2017 capture of a 14-foot and 0.75-inch gator.

This is the 15th alligator hunting season in the state’s history and the season will close on September 8th. The team says they’re planning on eating the gator meat and mounting the skull.