By Miranda Raye on March 15, 2019
Advertisement 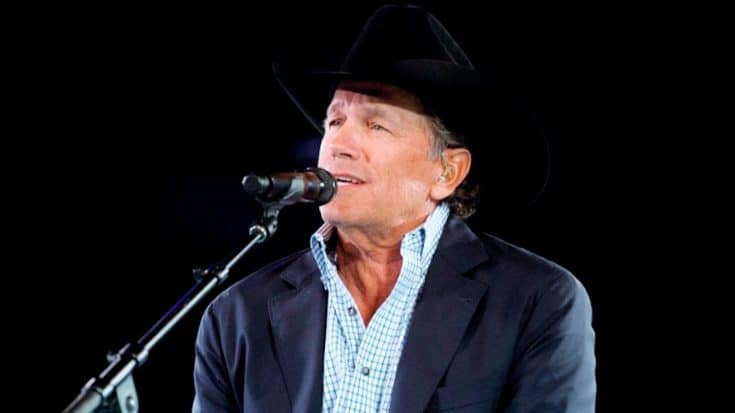 A New Album From “King George”

George Strait‘s new album, Honky Tonk Time Machine, just came out at the end of March 2019, but fans didn’t have to wait that long to hear “The King of Country’s” new songs!

There were already multiple Honky Tonk Time Machine tracks out there for fans to enjoy prior to the album’s release, including a fun ditty called “Every Little Honky Tonk Bar.” It’s as traditional-sounding as it gets!

Released as the album’s first single, “Every Little Honky Tonk Bar” quickly made an impact on country radio. It made its grand debut on Billboard‘s Country Airplay chart at the 20th spot. That’s pretty remarkable, since George had previously gone six years without charting a single in the Country Airplay Top 30.

That isn’t the only song that you can hear from Honky Tonk Time Machine. George also released another track, titled “God & Country Music,” and it’s gaining traction as well.

The big selling point on that song is the fact that it features George’s grandson Harvey, who can be heard singing along with him on the recording.

As the new album’s release date was approaching, George decided to give his fans another song to listen to. And get ready y’all, because it’s a tear-jerker.

A Song That Carries A Wealth Of Weight

Written by George, his son Bubba, and Dean Dillion, the new song that George debuted the audio for is named “The Weight of the Badge.” The track serves as a way for George to pay his respects to law enforcement officers, and he does so powerfully. He went on to release it as the second single off of the album.

George serves as a sort of narrator in the song, relaying the events in the life of a 15-year veteran of the police force. He notes how the officer’s father was also a cop, and now he is following in his footsteps.

Some of the earliest lines start to tug at your heart, as you listen to George sing of how the officer leaves behind his wife and kids each time he heads out to work.

@GeorgeStrait This Police Sgt Thanks you for “ The Weight of the Badge”. Magical! #ThinBlueLine

The wife and kids are mentioned again in one of the song’s most emotional moments, as George reveals that the officer was once seriously injured while out on call. His wife and children rushed to his bedside in the hospital, and prayed he would survive.

He did, and even though he went through such a traumatic experience, he recovered and returned to work on the force. That’s when George expresses how the officer will never “buckle” under the weight of the badge he wears on his uniform, no matter how tough things may get.

The official audio clip for “The Weight of the Badge” was just released, but a few people got the chance to hear the song before then. And they were able to hear it live…

The first time George ever played “The Weight of the Badge” was while he was performing in Vegas as part of his residency. This particular performance took place in late February 2019, right around the time that George started introducing other new songs.

After explaining the meaning behind the song’s weighty title, George moved in to singing it for the thousands of fans who had gathered to see him perform. They watched and listened intently, and surely most of them had tears in their eyes by the end.

Would you like to hear “The Weight of the Badge” live? Head below to check out a fan-filmed video from when George debuted the song in Vegas. Somehow, it’s even more powerful to hear in a live setting like that.

This emotional song is one that George’s fans are sure to remember forever. Once you hear it, you’ll understand why.