Georgia Family Accidentally Buys Christmas Tree With Owl In It

By Manly Bryant on December 19, 2019
Advertisement 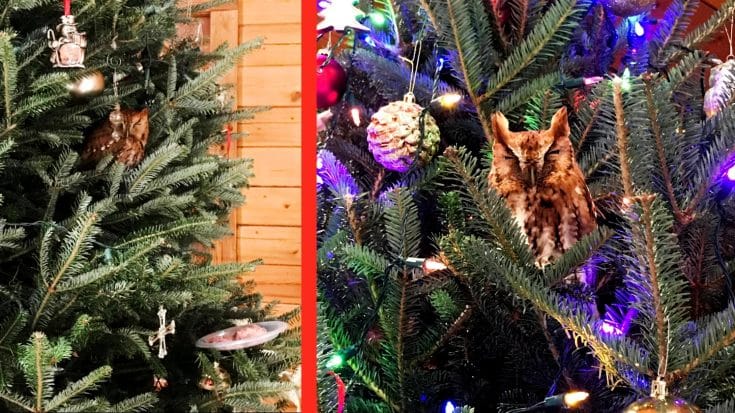 An unexpected visitor gave a Georgia family a surprise just before Christmas and boy was it a hoot!

The Newman family who lives just outside of Atlanta came to discover that an owl had somehow made a home out of their Christmas tree they picked up a week before.

Their 10-year-old daughter, India, made the shocking discovery last Thursday (December, 12th, 2019) as the family was cleaning up after dinner.

Mom, Katie McBride Newman, says that she loves owls and has plenty of tree ornaments, so the tree had at least a dozen different owl decorations on it.

“[India] comes very dramatically into the dining room and goes, ‘Mama, that ornament scared me,'” Katie McBride Newman explained to CNN. “Then she bursts into tears.”

Mom heads into the living room to investigate what her daughter was upset about and, lo-and-behold there is a REAL, LIVE, OWL inside the Christmas tree.

No joke, we just found a LIVE owl roosting in our Christmas tree. What?!?!? Billy Newman

After discovering the owl and trying to figure out exactly how it got inside their tree, they assume it must have flown in when they were carrying it into the house. Now, they have to try and get it to leave.

So, that evening, they left the windows and doors open to the house in hopes that the bird would see an escape route and leave on its own accord.

Unfortunately, it did not.

Owl Update: 7:15am – Last night we shut all the interior doors, turned off all the lights and came to initiate owl…

“Owl Update: 7:15am – Last night we shut all the interior doors, turned off all the lights and came to initiate owl removal – and he was NO WHERE to be found. Gulp. So we opened the double doors by the tree wide and went to bed. At 1:30am, Billy came out to check, and was roosting on the tip top of the STAR,” Katie wrote in a follow-up post on Facebook.

The family rang up a local wildlife expert at the Chattahoochee Nature Center who told them to try and feed it some raw chicken because it likely had not eaten in some time.

He ate some chicken!!! You can see the plate in the tree if you scroll down a bit in the pic. When I peeked around the…

Apparently, the small owl was pretty hungry and ate some chicken! Luckily, the wildlife center was sending someone out the next day to help secure the bird.

The employee who arrived on Saturday (December 14th, 2019) explained that the owl was an Eastern Screech Owl which is a common species for the state.

Billy Newman, Katie’s husband, is a photographer and got some really beautiful photos of the bird that almost look like stock photos!

He explained in the interview with CNN that during their conversation with the employee from the wildlife center, she noted that the bird was quite thin and together they theorized that the owl had probably been inside the tree when they purchased it!

After helping to secure the owl in a crate, the employee told them to keep the owl in a dark room until night time and then release it outside. That same night, they put the crate outside and the owl had flown off before 10 pm!

Check out the final chapter post Katie Newman made below!

The Final Chapter: Bye bye, birdie. Thank you for the honor you bestowed on our family – for making the magic &…