Georgia Man Gets 91,000 Oily Pennies As His Final Paycheck 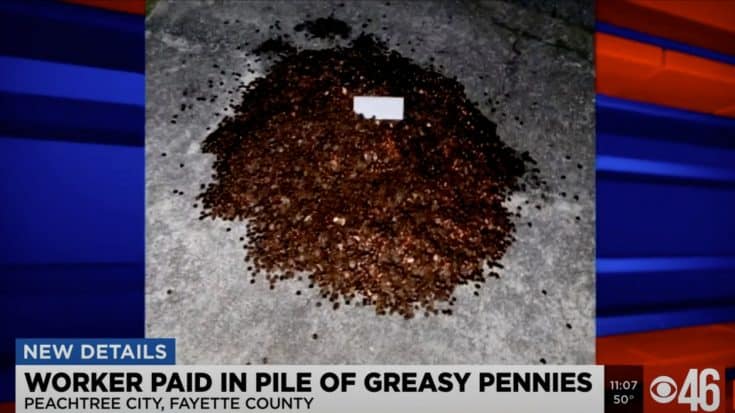 According to Andreas Flaten and his girlfriend Olivia Oxley, over 91,000 pennies were dumped on their driveway in the middle of the night along with an expletive-ridden paystub from his former employer A OK Walker Luxury Autoworks.

“Probably a thousand dollars’ worth of pennies and a little love note,” Oxley said in a video shared to her Facebook page showing the massive pile of greasy coins. “And they’re covered in something…don’t know what it is, but it smells funny.”

Andreas and his girlfriend shared that auto shop owner Miles Walker owed him $915 for hours worked which had not been paid since leaving after his two-week notice. He states that Walker promised to pay him in January.

The check never came and then Walker claimed damages, Oxley said in her post.

“Fast forward 3 months and he was refusing to send out the last paycheck claiming damages to the shop. Once the word ‘lawyer’ was introduced, this is what he did.”

Jamie Kennedy, a reporter for CBS46 Atlanta, went to the auto shop to speak with Mr. Walker about the incident, but was met with a very bizarre response in which the owner said he “didn’t remember” if he left the pennies on the driveway and then called Andreas a “weenie” for even bringing the matter up.

“So, you did drop the pennies over at that person’s house?” asked Jamie.

“I don’t know if I did that or not, I don’t really remember,” said Walker.

“You don’t know if you did it or not?” asked Jamie.

“It doesn’t matter! He got paid, that’s all that matters, he’s a f*****g weenie for even bringing it up,” said Walker.

See the full report on this incident below along with Jamie Kennedy’s audio of his conversation with Mr. Walker.

More employees from A OK Walker Luxury Auto shop have come forward to talk about the toxic work environment. So I went to ask the owner about what started the whole conversation, paying employees in thousands of pennies. #peachtreecity @cbs46 pic.twitter.com/rTZtCC7Lv9