Giant Snapping Turtle Hit By Car Gets Saved By Biker

By Manly Bryant on August 7, 2019
Advertisement 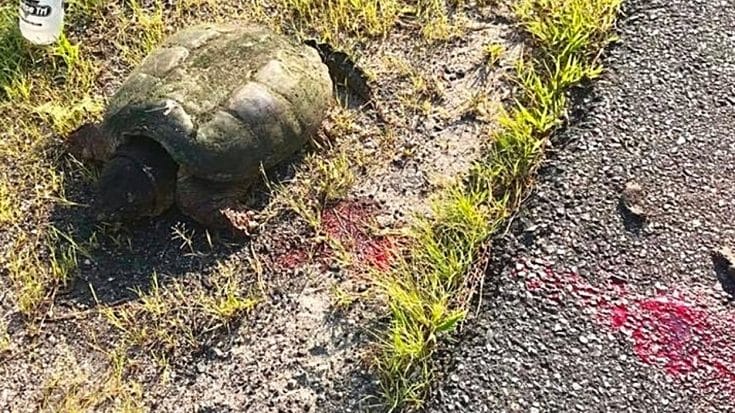 Lindsay Grand Zabbia was riding her bike with her husband through the Calverton Veterans Memorial Park when noticed a puddle of blood on the side of the road. Following the trail of blood, she saw a 25-pound snapping turtle in major pain.

The Turtle Had Been Clipped By A Car

Getting off her bike to check him out she realized the turtle had been clipped by a car and it appeared it had just recently happened. It was 8am in the morning and her husband Joseph Zabbia decided to bike back to his Jeep so they could safely escort it to an animal hospital.

“It was a huge snapping turtle. He probably just got clipped by a car. He wasn’t moving; he probably got hit in the head,” she said.

The Turtle Was Injured So Badly

It was so hot outside that if they left it there it would have taken four days to bleed out and die, not to mention the flies eating it alive. So they quickly took it to the hospital saving it from a slow and painful death. Once they got it to East End Veterinary Center he stayed alive for a little while but unfortunately, the turtle was injured so badly it had to be euthanized.

“It’s a shame he didn’t survive, but it was so hot out there. We didn’t want him dying out there in the heat,” Lindsay said.

Even though he died at least he passed away in peace instead of agonizing pain. According to the Turtle Rescue of the Hamptons about 180 turtles have been brought into the veterinary center and 95 percent of them have been rehabilitated and set free back into the wild.