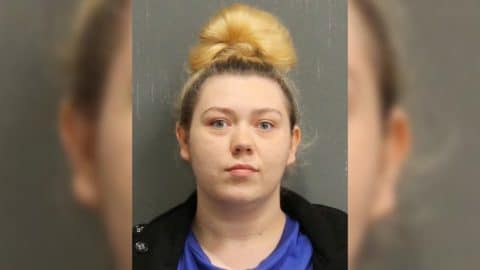 Makayla Fryar from Nashville, Tennessee has been charged with vandalism after an incident on April 10th, 2021 involving her and her boyfriend’s car.

“Makayla Fryar, 23, is charged with vandalism after Nashville police say she smashed her ex-boyfriend’s pickup truck and spilled beer in the driver’s seat,” WZTV FOX 17 News Nashville wrote on Facebook.

Nashville police said the incident happened on April 10th in the 800 block of Tuckahoe Drive. According to her affidavit, the boyfriend’s Ford F-150 was parked in front of his home when Makayla showed up at the location. She hit the front windshield with an “unknown object” causing a large crack.

She then proceeded to open up the vehicle and pour “what smelled like some type of beer” all over the driver’s seat. The boyfriend’s brother was inside the home and spotted her and called the police. By the time authorities arrived, Makayla had already fled the scene.

Authorities tallied up all the damages to the vehicle and it added up to $450 that she’ll have to pay the court. She was arrested three days later after the incident and public police records show she is now free on bond.

We can imagine the big question that’s running through a lot of people’s minds is, “Why did she do it?” What do you think got her upset enough to be willing enough to take the consequences of vandalizing her boyfriend’s truck? Let us know in the comments below! Also, check below to see the Facebook statement about the incident from WZTV FOX 17 News Nashville.

Mug Shot Of Makayla Fryar Below