Girl Hypnotized Into Believing She Was Truly Meeting Dolly Parton

By Manly Bryant on May 4, 2022
Advertisement 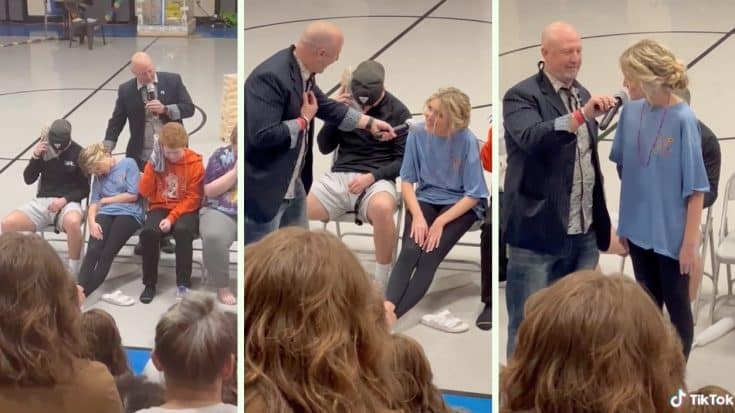 Homegrown southern girl and TikToker @hithereitsmia, also known as Mia, shared a hilarious video of herself getting hypnotized into believing she actually met Dolly Parton.

The video showed a hypnotist who was attending her school and had called her, along with several other students, to the front of the gymnasium to perform his incredible talent of hypnotizing the willing participants.

It starts off with him already having hypnotized the students and he specifically goes over to tell Mia that when she wakes up, she will believe he is Dolly Parton and that she’ll want to sing a song with her.

When she opens her eyes, the man walks around the gymnasium pretending he is Dolly Parton and Mia is in a complete trance, star-struck believing that she is truly looking at the real superstar.

“At the time, I believed it was actually Dolly. I couldn’t have pretended without laughing. I giggle nonstop, lol,” she wrote in TikTok.

The crowd screamed out that Mia could sing so the hypnotist gets his DJ’s attention to queue up the classic Dolly Parton song “9 to 5” and asks Mia to join him at the center of the gymnasium to sing it a capella.

Mia may have been under the influence of the hypnotist, however, her singing was one-hundred percent real. She sang the song, debatable as well as Dolly would have, while her friend filmed the entire thing.

Mia later posted the video to her TikTok and it has since gone viral getting more than 1.1 million views in just two days.

Watch Her Get Hypnotized Below