By Miranda Raye on November 6, 2019
Advertisement 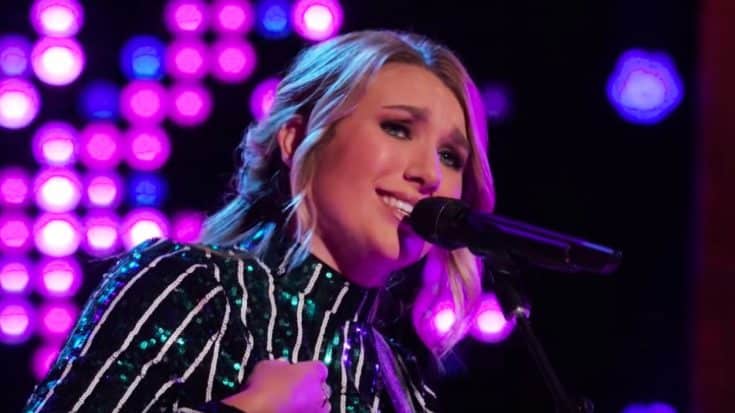 When 16-year-old Gracee Shriver opened her mouth and started singing during the Season 17 Voice blind auditions, the coaches knew she was someone special. But her audition came toward the end, so teams were filling up.

After hearing Shriver sing Kacey Musgraves‘ “Rainbow” in the blinds, Blake Shelton wanted her for his team. But he was left kicking himself, since his team was already full and he had no room for her.

Shriver ended up finding a home on Team Kelly. She worked with her coach to perfect Keith Urban‘s “Blue Ain’t Your Color” for the battles, in which she competed against Brennan Lassite.

In the end, Clarkson chose Shriver as the winner, and she moved on to the knockouts.

For the knockouts, Shriver prepared her rendition of a 2006 hit by a now-defunct country duo, “Leave The Pieces” by The Wreckers.

“Leave the Pieces” was the duo’s sophomore single and biggest success. It topped the Hot Country Songs chart and crossed over to snag the 34th position on the all-genre Billboard Hot 100.

The Wreckers released two more singles after “Leave the Pieces” before disbanding in 2007. Now, their legacy lives on through the voices of those that sing their songs, such as Shriver.

Shriver’s knockout performance was just as impressive as the ones she delivered in the past, leaving Clarkson with a tough choice to make. Perhaps she knew that Shriver could be a potential “steal,” which may be why she chose Damali as the winner of the knockout.

If that was what Clarkson was thinking, she was right. Shelton swooped in to use his final steal on Shriver, welcoming her to his team after wanting her since the blind auditions.

First @JohnLegend steals Alex and NOW @BlakeShelton stole Gracee!! WHAT IS LIFE?? I love these artists!! I love this show!! #VoiceKnockouts

Clarkson jumped up and gave Shelton a hug as a “thank you” for saving Shriver from elimination.

Tune in to the video below to watch Shriver sing “Leave the Pieces.” Then, you’ll understand why Shelton chose to use his last steal on her.