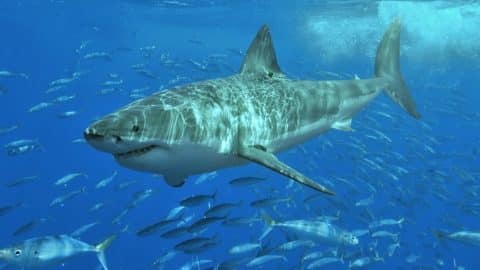 According to the Western Australian authorities, a man is in trouble after impersonating a great white shark and setting off multiple alarms that sent thousands of hoax alerts to local residents.

The incident took place in Albany, Australia and police said a 48-year-old man told them that he was fishing when he accidentally caught the great white shark.

He said he released it back in the water but before he did, while he was removing the hook from the shark, he decided to pull out the tracking device that was implanted in its back beside its dorsal fin.

“It leaves an untagged white shark that we know is in waters off Albany,” Sen. Sgt Letessier was quoted saying by the Albany Advertiser. “Also the false alarm causes unnecessary fear to residents and people using the water.”

He placed the tracking device in his pocket and then between the dates of August 13 and Sept 1, buoys at Ellen Cover and French Bay signaled off that the “shark” was in the area several times. Tens of thousands of alerts were sent off to the locals warning them about the apex predator and eventually, authorities were able to track down the man.

“WA police have charged a 48-year-old man with theft in connection with the alleged theft of an ‘acoustic monitor tag’ used in tracking great white sharks by the Department of Primary Industries and Regional Development (DPIRD),” reads a statement from police issued to Guardian Australia.

According to local officials, the man is scheduled to appear for a court hearing on November 4 where he will face charges for stealing the tracking device.