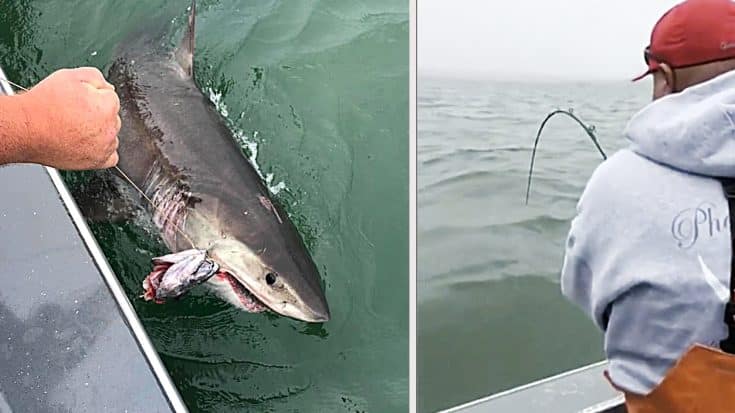 It was a normal day of fishing for Captain Joey Gamez who works for the Golden Gate Sport Fishing group when he snagged a great white shark on his line.

Battles The Shark For Over An Hour

Joey was out in the Bay Area with six other fishermen close to half a mile from the famous Alcatraz prison when it all went down. Someone on the boat quickly pulled out their camera and started filming (which you’re about to see below).

It’s “like hooking into a Volkswagen that was a hundred feet deep and just trying to hold on to the rod and reel,” Joey said.

He battles the beast for over an hour as it pulls the boat a couple of miles out into the water. Joey says he’s been fishing in the Bay for over twenty years now, often spending four to five days a week on the water and has never experienced anything like this.

The Shark Was Freed Back To The Sea

Joey said the great white was about 6 feet long and probably weighed about three to four hundred pounds. Fortunately, after a long standstill with the shark, Joey was able to free the shark from his hook and it swam away peacefully.

They say great white sightings in the Bay Area of San Fransisco are very rare but not unheard of. So if you’re out on the water there just be on your guard.

Watch the full video of the great white shark below.