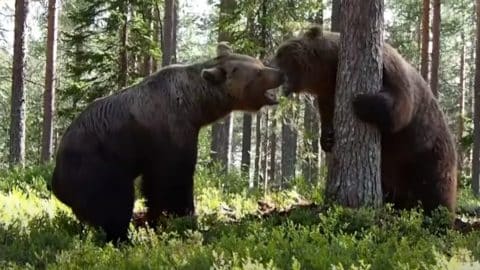 Samulin Matkassa from Finland shared a video on YouTube of two massive grizzly bears doing battle in the middle of the woods and it was filmed from three different angles.

The video shows close-up footage of a bear munching on grass while it’s approached by another bear growling, snarling, and obviously wanting a challenge.

The grass munching bear was eager to step up to the challenge and turned around to face the other bear. The challenger walked over to a tree to put it between itself and his opponent who was moving towards him.

“When defending themselves bears make themselves look bigger by fluffing up their fur and standing on their hind legs. When angry they will growl, pound their paws on the ground and charge towards whatever is bothering them,” Kid Zone wrote about bear behavior.

The two bears used the tree to stand up on their back legs to get a better look at each other as they danced around the tree.

“A bear standing on its hind legs is just trying to better identify what has caught its attention. As I’m sure you’ll agree, it’s much easier to see, hear and smell things from a standing position, than down on all fours,” Bear Smart wrote about bears.

It was all nonphysical until one of them decided to bite the other one in the shoulder and then it was on. That’s when they moved away from the tree and really started wrestling.

Another bear hearing the commotion in the distance can be seen running over to watch the battle. It could have potentially been a female bear the male bears were fighting over, or just another bear curious to what was going on. Either way, the battle lasted for about five minutes and it’s fascinating to watch.

Watch Footage Of The Bear Fight Below