By Miranda Raye on August 21, 2018
Advertisement 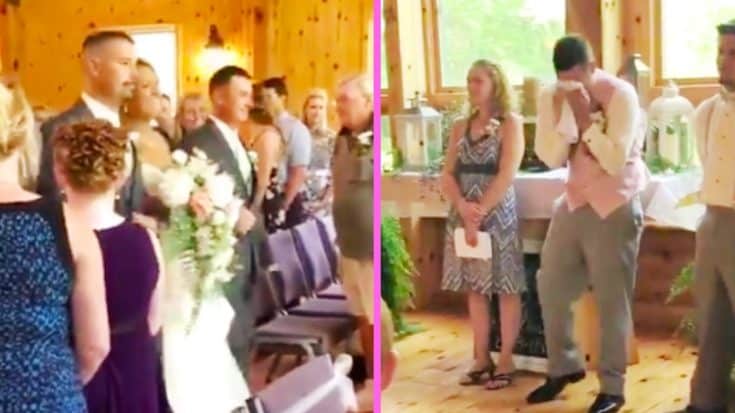 In the few years since Dan + Shay made their way on the scene, the duo has already experienced a fair share of success. They’re known for releasing some of the most romantic country songs to hit the genre in modern years, including “From the Ground Up” and “How Not To.”

Another Dan + Shay love song also won over the airwaves. Titled “Speechless,” the song was released off of their self-titled album.

During an interview with People, Dan spoke about how they came up with the song, saying it was inspired by their wives:

“I had this title ‘Speechless’ in my phone — you’re at the altar waiting for your bride to walk down the aisle, then that moment happens and you have nothing to say. I remember being up there on our wedding day…and she walked up and I was at a loss for words.”

When it came time to put together a music video for the song, Dan + Shay decided to construct it out of footage from their respective weddings.

Even when “Speechless” had only been out for a few months, many country fans have fell head over heels for it. So it only made perfect sense why one country music lovin’ bride decided to walk down the aisle to the song at her 2018 wedding.

A video shows the bride’s entrance to “Speechless,” but keeps its focus on the groom, who had the most priceless reaction. As soon as his gorgeous bride came into view, the lovestruck groom felt a wave of emotions roll over him, and he couldn’t hold them back. He was so moved that he had to take out a handkerchief to dry his tears.

Dan + Shay happened to come across the video, and shared it on Instagram. Comments flooded in from fans, with many saying they got chills or teared up over seeing the groom’s reaction. You’re sure to have a similar reaction once you watch the clip below.

This is how every bride dreams that her groom will react when he sees her walking down the aisle!