By Manly Bryant on January 25, 2022
Advertisement 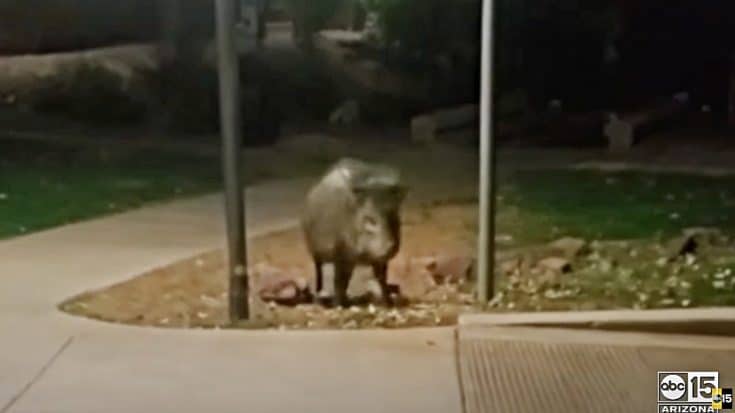 A woman is warning her community after she and her dog were viciously attacked by a group of javelinas roaming around her neighborhood early in the morning.

Wendy Van Etten, the owner of a 12-year-old corgi mix dog named Chancee, said they were out for their early morning walk at their Phoenix apartment complex near the Phoenix Sonoran Preserve when the encounter went down.

Wendy noted that they have seen javelinas in the area before, but this was the first time they had ever been attacked by the creatures.

She told ABC that the javelinas “jumped on Chancee‘s back end and was like biting at him. Then the other two came from the side and that’s when I tripped over Chancee‘s leash and then, all of a sudden, I started to get myself up but all I could worry about was Chancee. So, I was calling him and calling him and trying to fight these things off.”

Right as things looked like they were about to take a turn for the worst, two men overheard the commotion and ran to Wendy’s aid.

“They started stomping and yelling. So, as soon as they did that, the javelina let loose and that thing took off like a bat out of H-E-double-tooth-picks,” she said.

Chancee was taken to the vet where he had to undergo surgery.

The scuffle left him with a badly injured tail which may have to be removed in the future if it causes health problems. He also had bite marks all over his body from the javelinas.

“The reason he has 28 stitches inside, that tooth dug into his tail while he gripped it. That’s why it was so deep and the tail already was almost cut off. So, I mean, Chancee’s gone through a lot,” Wendy said.

The attack on Chancee was traumatizing for the 12-year-old pup and they will forever be very cautious from now on.

Wendy said she doesn’t want all the javelina in her area to be removed, just the super aggressive one that was extremely vicious to them.

Full Video Interview With Wendy Below