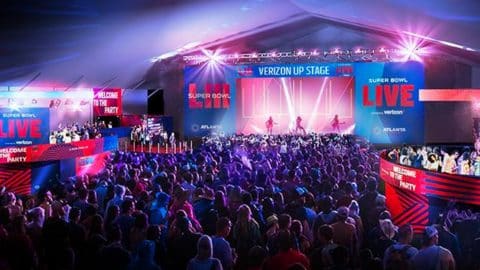 Festivities for Super Bowl LIII are well under way.

The Los Angeles Rams and New England Patriots both arrived in Atlanta, where the big game is being held, on Monday (Jan 28). Parties, press conferences, and concerts alike kicked off the same day, giving football fans many different events to go to leading up to Super Bowl Sunday (Feb 3).

The Patriots are hosting an official Fan Rally the day before the big game and have invited one of the hottest groups in country music to perform!

All season long, country duo LOCASH has been traveling around the country on the Pepsi Tailgate Tour, making stops for various college and NFL football games. Pepsi and LOCASH teamed up to throw tailgate parties in cities like Arlington, Philadelphia, Pittsburgh, and Miami Gardens, just to name a few. The Tailgate Tour had eleven stops from September to December and will conclude with their biggest and best one yet for Super Bowl LIII.

Preston Brust and Chris Lucas make up LOCASH, and they have already arrived in Atlanta for some Super Bowl festivities. On Thursday (Jan 31), the “I Love This Life” singers helped name the NFL Rookie of the Year at the Rookie Brunch Party. The coveted honor went to New York Giants running back Saquon Barkley.

The Patriots Rally will be at the Verizon UP Stage from 1pm-2pm and will have two cheerleader performances, Injured Reserve and active player interviews, alumni interviews, an appearance from the owners, a Super Bowl ticket giveaway as well as other giveaways, and, of course, a performance from LOCASH!

We’re sure all of Pats Nation will be going into “Full Gronk Mode” during their set!

Not only will LOCASH be pumping up the Patriots fans on Saturday, their own fans are now pumped up for their upcoming album, which they just announced on Friday (Feb. 1) titled Brothers.

So excited to announce our new album BROTHERS! Available 3.29 and you can pre-order now via the link in our story☝🏻

It will be released on March 29th and is available for pre-order here.

Watch LOCASH’s music video for their latest single, “Feels Like A Party” – which they will most definitely be performing at the rally – below!