By Manly Bryant on August 9, 2022
Advertisement 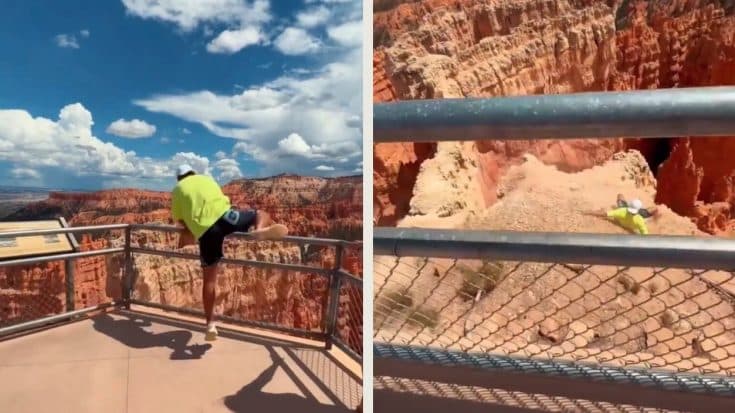 Tourons Of Yellowstone shared a very scary video showing what not to do when you go visit Bryce Canyon and it’s of a man jumping over the safety guardrail and almost falling off a thousand-foot cliff to his death.

His girlfriend, sister, or someone who loves him very much was recording the video as it starts off with him standing near the guardrail with an incredible view of the Bryce Canyon in the background. We’re not sure if she knew what he was about to do or not but she filmed and followed him as he leaped over the railing.

The man lands on the other side where there was a small drop with loose gravel. When he landed he stumbled and began to slide down the mountainside and was heading towards a thousand-foot drop-off.

As he is sliding you can hear the girl screaming in terror as she was about to potentially watch her loved one fall to certain death. Fortunately for him, however, he was able to stop himself from sliding right before going over the edge.

Tourons of Yellowstone  wrote on Instagram “I don’t normally post two non Yellowstone tourons in a row, but this guy is a real IDIOT and I couldn’t help myself. First Bryce Canyon post I’ve ever done, I think.”

We can only imagine his whole life probably flashed before him. Hopefully, this incident taught him a lesson about valuing his life more than creating a video for social media.

If he would have fell, not only would he have died but dozen or more Bryce Canyon National Park Search & Rescue officials would have had to risk their lives trying to retrieve his body.

Park officials say breaching barriers and doing what the man did was very illegal and he will most likely have to deal with fines or even imprisonment for his behavior.

Watch Footage Of The Incident Below