By Jennifer Pernicano on May 12, 2021
Advertisement 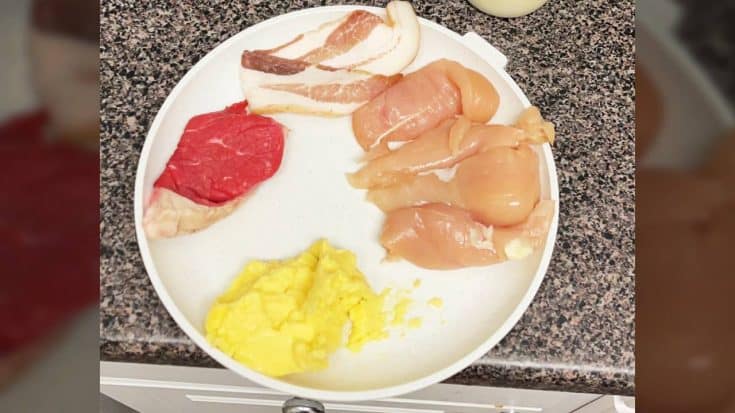 WARNING: DO NOT CONSUME RAW CHICKEN

Twitter user @BlazenBrady has gone viral for his post-workout meal.

On May 7, he shared a photo of his plate of food consisting of raw chicken, raw steak, raw bacon, raw butter, and raw milk.

“Post workout meal,” he wrote. “Chicken is not bad at all and tastes fine. This meal is my standard meal I usually eat all the time, I eat mainly more steak over chicken though usually.”

Chicken is not bad at all and tastes fine. This meal is my standard meal I usually eat all the time, I eat mainly more steak over chicken though usually pic.twitter.com/1q2rGOm6qF

Lots of people questioned the validity of his tweet, so he posted a video of himself eating the raw chicken.

Since everyone is asking me for a video of eating raw chicken here you go. And remember the Raw Primal Diet is your natural diet, that regenerates you over time and will make you feel amazing. pic.twitter.com/8rxhWuhjfP

This isn’t the first time the Twitter user has shared photos of his raw meat meals (which again we advise not to follow suit). In March, he shared a photo of his meal consisting of raw beef brain, raw sirloin steak, and avocado.

Brain is honestly the best tasting organ of them all. Tastes fatty, kind of like an egg. pic.twitter.com/4zLz36pgDn

Other meals he has posted photos of included raw chicken liver, raw bacon, and raw butter.

Liver is a superfood and one of the most nutrient dense parts of the animal. #RawPrimal pic.twitter.com/EWxQK3YBBd

Check out his other raw meals below.

This is what premier health food looks like. pic.twitter.com/RaMFqtS57R

Look how yellow this raw butter and soy free eggs are. Now go look at your processed bullshit. Guarantee the butter appears more white and the eggs look off pic.twitter.com/g7AlLra2Co

His completely raw meat meals have gotten lots of criticism online. One person tweeted, “I wouldn’t even feed this to my dog. Take care of yourself, dude,” while another said, “the devil works hard but your appendix works harder.”

Meanwhile, the Twitter user has responded to many of his doubters claiming that his diet is healthy and he has never gotten sick.

Again, we advise you to cook for meats to the the correct temperature zone for safe eating!