Guy Finds Huntsman Spider Tickling His Ear From Inside Earmuffs

By Manly Bryant on October 14, 2020
Advertisement 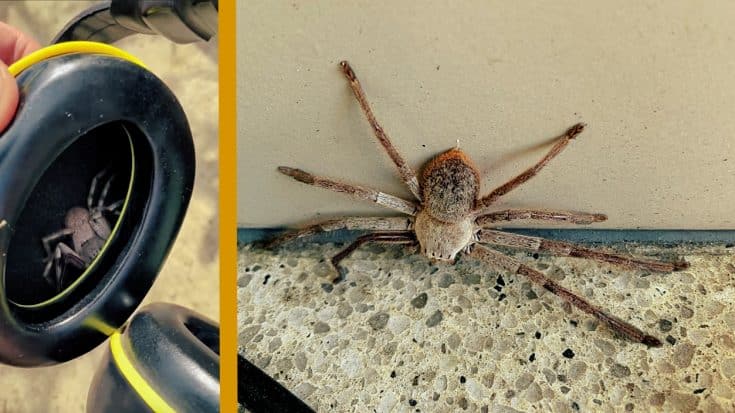 Olly Hurst, a plumber based in Perth, Australia, is used to wearing earmuffs during his working hours to protect his ears from the noise and to help him maintain focus.

While having his earmuffs on, he felt something tickling him but he couldn’t tell what it was. He decided to check what was inside his earmuffs.

“I absolutely knew I could feel something tickling my ear. Hmmm, nasty,” Olly shared with ABC Perth.

Olly took off his earmuffs and looked at what was inside. He discovered a huntsman spider hiding in them. He tried to remove the spider from the earmuffs, but the spider resisted and did its best to stay. Then Olly decided to shake the earmuffs which triggered several comments on the ABC Perth Facebook page.

“I bet the spider had a headache,” Kathleen Lauchlan commented on the post.

“Poor thing, would have been terrified. Hope it got out safely,” Natasha Parkinson stated.

“Beautiful creature. Would definitely be easier to admire it from further away than your eardrum though,” Kerryn Weier shared.

"I felt something tickling my ear": Huntsman spider found hiding in earmuffs

NOOOPE! ??️Perth plumber Olly Hurst got the fright of his life when he took off his earmuffs to find a huntsman spider hiding inside.He said he could feel something tickling his ear ?Is this what nightmares are made of? What would you do if this happened to you?? Olly Hurst