By Miranda Raye on May 7, 2019
Advertisement 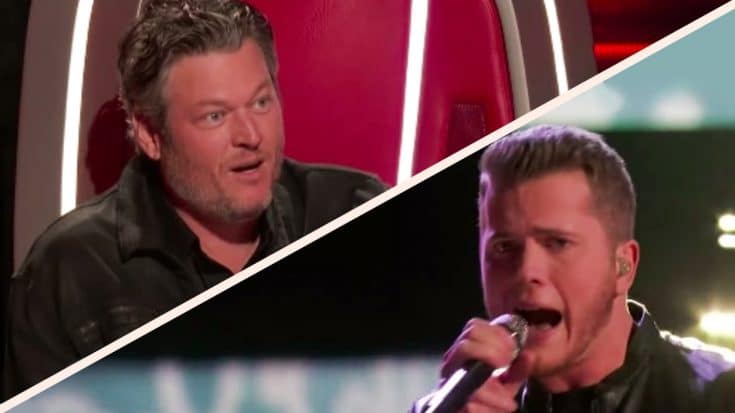 A Surefire Star On Team Blake

Following the new cross battles on Season 16 of The Voice, 24 artists were left to compete. Those 24 artists advanced into the normal live shows, and after their performances they were left to face the biggest elimination of the season.

Only 13 singers made the cut, while 11 others were sent packing. Blake Shelton‘s team fared the best, since he managed to keep six singers for the next round.

They're singing their hearts out in ONE HOUR. #VoiceTop13 pic.twitter.com/Hx9NL1TQLl

One of those singers was Gyth Rigdon, a standout star on the show. Many hail him as the best country singer of his season, and when you hear him sing, it’s easy to understand why.

Week after week, Rigdon has wowed the coaches and America with his impressive voice and captivating stage presence. One of his best performances was during the cross battles, which is when he covered his coach’s tearjerking breakup song, “Goodbye Time.”

The track, originally recorded by Conway Twitty, was released by Shelton in 2005 off of his 2004 album Blake Shelton’s Barn & Grill.

After singing a Shenandoah classic during the first week of live shows, Rigdon revisited his coach’s old material for his next performance. The fans got the chance to pick the contestants’ songs, and for Rigdon they chose another hit track of Shelton’s from the same old-school album…”Nobody but Me.”

Shelton released “Nobody but Me” in 2005 as the third and final single off of Blake Shelton’s Barn & Grill. The song has the country superstar begging his lover to never leave him for somebody else, and features a passionate chorus.

Listeners loved the song, and it peaked at the fourth spot on the U.S. Hot Country Songs chart.

Since viewers are already familiar with and love “Nobody but Me,” Rigdon knew he had to deliver, otherwise he could be sent home. And deliver he did…

Rigdon started off the performance at center stage, standing behind a microphone while playing guitar. But he ditched the guitar and the mic stand mid-performance so he could roam around stage, and that’s when he really let loose.

From powerfully belting out the chorus, to throwing in a little falsetto, to interacting with the crowd, Rigdon checked off all the boxes that make a performance stand out. Be sure to see just how well he managed to pull off “Nobody but Me” by tuning in to the video below.

When you see this, you’ll understand why so many people think he’s destined to be a future country star!