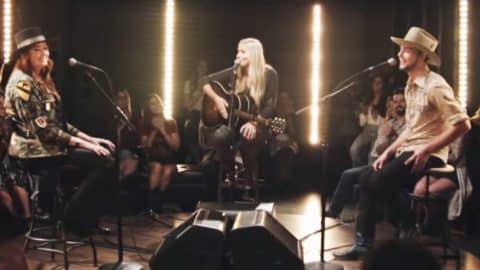 In March 2020, CMT launched a new digital series called Another Round.

The series will include various artists performing “in the round” for a small audience. The first episode premiered on March 11 and it features siblings Hilary, Holly, and Sam Williams, who have never performed together in public.

“We’re from that outlier family in country music called the Williams family,” Sam said at the beginning of the episode.

The Williams family he is talking about is the Hank Williams and Hank Williams Jr. family. Hilary, Holly, and Sam are Hank Jr.’s children and Hank Sr.’s grandchildren, making them country music royalty.

After introducing themselves, Holly said they wanted to perform a song of their dad’s and their first thought was to do “Family Tradition.”

“We came in here this morning and started ‘Family Tradition’ and it was like the worst of ‘American Idol’ [auditions],” she revealed as her siblings laughed.

They scratched that plan and decided to go with another one of their favorites, “Whiskey Bent And Hell Bound.” We can assure you, they made the right decision.

Each sibling sang part of the song solo starting with Sam, followed by Holly, and then Hilary. You can tell they each have such pride while singing their daddy’s music and when it was over, the intimate crowd gave them a roaring round of applause.

Then, each of them performed an original song of their own. Hilary sang a song called “Drinkin’,” Holly played her song “Crazy,” and Sam sang one titled “Can’t Fool Your Own Blood.”

To wrap things up, they played a famous song their grandfather released in 1947 – two years before their dad was even born. Holly admitted it was the trio’s favorite song from the Hank Sr. collection, “I Saw The Light.”

Once again, they each took a solo in the song and came together for the chorus. During the second to last chorus, they led a sing along with the audience.

We’re sure Hank Sr. is proud of his grandchildren for keeping his legacy alive. Hank Jr. brings his kids on stage now and again, so we already know he’s proud, too!

Watch their full episode of Another Round below.