By Megan Dinsdale on May 30, 2019
Advertisement 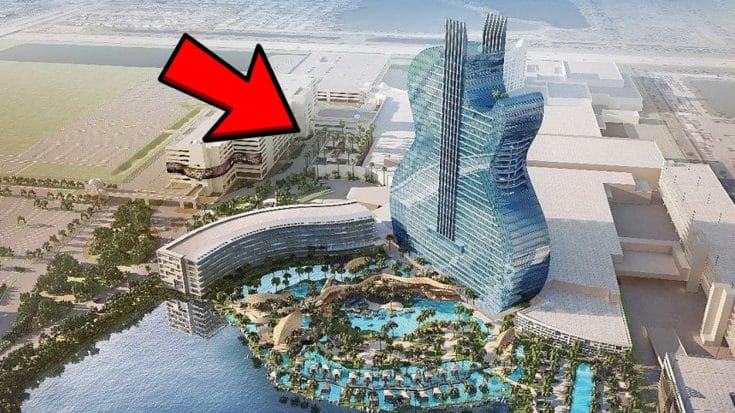 “There is truly, with zero exaggeration, nothing like it in the world.” – James Allen

Seminole Hard Rock Hotel has really gone above and beyond with this world class architectural feat. What started as a “crazy” idea in 2007 by James Allen, CEO of Seminole Gaming and chairman of Hard Rock International, the vision is finally coming to life this fall.

The world’s first guitar-shaped building is part of a 1.5 BILLION dollar renovation of the current Hard Rock Hotel in Hollywood, Florida. Designed to look like two guitars back to back, the completed building will stand 450ft tall and boast next level amenities. This is not going to just be another hotel and casino but will be a global landmark and travel destination.

Once completed, guests will be able to visit this guitar shaped building entirely wrapped with beautiful blue glass windows capable of withstanding a level 4 hurricane. The building will have 36 floors and an additional 638 rooms, bringing the total rooms of the Seminole Hard Rock Hotel to 1,270 rooms.

The new Hard Rock Hotel will also flaunt a 41,000 sqft spa, a retail shopping area that spans an extra 26,000 sqft, a rooftop bar that is 12,000 sqft, 16 new diverse restaurants, a comedy theater, and a whopping 150,000 sqft of convention and meeting space. Like I said, they really have gone above and beyond.

If pampering yourself isn’t really your thing, there will also be a 30,000 sqft gaming floor with over 3,000 of the most popular slot machines, nearly 200 gaming tables, and a 45-table poker room. You can ‘bet’ there will be something for everyone!

If the architectural accomplishments of this hotel doesn’t impress you enough already, the property will also have a 13.5 acre water paradise. The private paradise will consist of a tropical style beach front with private cabanas, waterfalls, swaying palm trees, and a large water expanse that is nearly 3 football fields in length for canoeing, paddle boarding, and other outdoor activities.

✨ICYMI✨ We announced our expansion plan 2 weeks ago and we will offer our hotel guests access to 3 (yes, 3!) brand-spanking new outdoor swimming pools that will measure the size of a football field! ??? Link in bio for full details.

At this point we’re in disbelief of what is being built in Florida right now. The Seminole Hard Rock Hotel will also have a 6,500-seat venue with state-of-the-art technology to bring on the best performances from around the world. With the goal of being one of the prime entertainment destinations, Hard Rock Live plans to host 100+ shows per year including; concerts, theatrical shows, boxing matches, and much more.

If we haven’t convinced you that this is a must-see destination then we at least have convinced ourselves. The new Seminole Hard Rock Hotel opens October 24th, 2019 and rooms will be available to book beginning July 24th, 2019. Grammy-award winning band Maroon 5, led by Adam Levine, will headline the grand opening on Friday, October 25th 2019. Following suit will be one of the world’s greatest classical singers Andrea Bocelli who will take stage at the Hard Rock Live Thursday, November 7th 2019. We’re excited to see what else is in store for the phenomenal new venue.