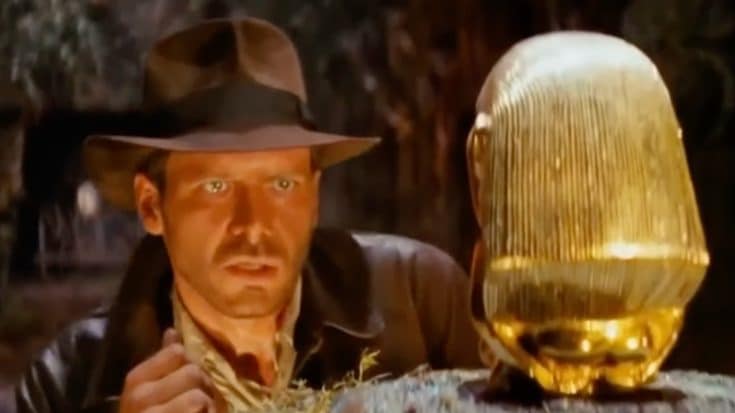 Harrison Ford appeared at the D23 Expo on Saturday (September 10) where he took the stage to share the first trailer for the upcoming Indiana Jones 5.

Harrison Ford appeared as Indiana Jones for the first time more than four decades ago.

Raiders of the Lost Ark was released in 1981, the first of a five movie commitment between Steven Spielberg, George Lucas of Star Wars fame, and Paramount Pictures. The franchise follows the adventures of Dr. Henry Walton “Indiana” Jones Jr., a fictional professor of archeology played by Harrison Ford.

A prequel, The Temple of Doom, followed in 1984. And five years later The Last Crusade was released.

Nearly twenty years passed before the fourth film, Kingdom of the Crystal Skull, was released. This installment of the Indiana Jones adventures is often thought to be the least popular among fans.

Director and producer Steven Spielberg told Empire that there were certain aspects of the film that he didn’t like either, but was willing to compromise to see George Lucas’s vision come to life.

“I’m very happy with the movie. I always have been…I sympathize with people who didn’t like the MacGuffin because I never liked the MacGuffin. George and I had big arguments about the MacGuffin,” Spielberg said. “But I am loyal to my best friend. When he writes a story he believes in – even if I don’t believe in it – I’m going to shoot the movie the way George envisaged it. I’ll add my own touches, I’ll bring my own cast in, I’ll shoot the way I want to shoot it, but I will always defer to George as the storyteller of the Indy series. I will never fight him on that.”

Indiana Jones 5 has been a labor of love.

George Lucas started writing the screenplay for Indiana Jones 5 in 2008, but the project stalled as his company turned their focus to the Star Wars sequel trilogy. Eventually, the script bounced around between writers, with filming being delayed as scripts were rewritten.

Filming began on the movie in June 2021 and wrapped in February 2022, making it the first of the Indiana Jones franchise not directed by Steven Spielberg nor written by George Lucas.

Set to be released in June 2023, the fifth Indiana Jones movie will also be the last of the franchise that will star Harrison Ford.

The 80-year-old actor made the announcement during an appearance at the D23 Expo on Saturday. Harrison Ford surprised fans in attendance by sharing the first trailer for Indiana Jones 5. He followed the clip with an emotional speech to the crowd.

“Thank you for making these films such an incredible experience for all of us,” he said to the crowd as his voice shook with emotion. “I’m very proud to say to say that this one is fantastic. And this is one of the reasons,” Ford said as he pointed to his co-star, Phoebe Waller-Bridge.

“Indiana Jones movies are about fantasy and mystery, but they’re also about heart,” he continued. “We have a really great story to tell.”

Ford then implied that this will be his final Indiana Jones film, saying, “This is it. I will not fall down for you again. But thank you so much.”

While the trailer hasn’t been made public yet, fans in attendance report that the action-packed clip features much of what we would expect from Indiana Jones, including, “car jumping, running atop trains and a scene in which Ford on a horse is dodging an oncoming train,” and a nod to Raiders of the Lost Ark as Ford stares down a gunman, whip in hand.