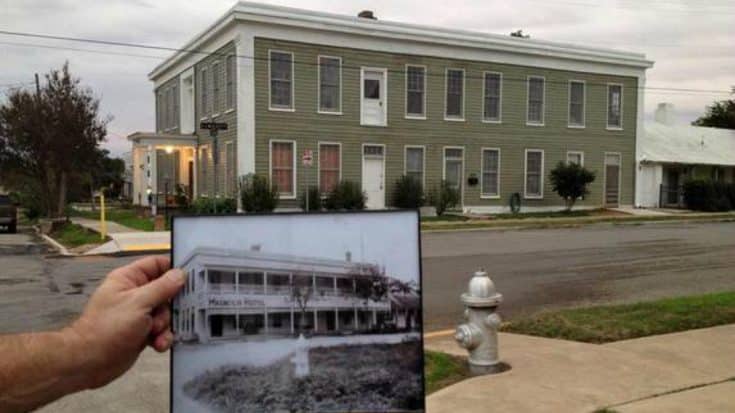 In 2013, an adventurous Texas couple purchased a nearly 200-year-old hotel to save it from Preservation Texas’ Most Endangered List. But, once Erin and Jim Ghedi began working to restore the hotel, they realized that they weren’t alone.

“We hear conversations in the rooms throughout here when we’re here by ourselves, and we go looking and there’s nobody there,” Jim said of the historic Magnolia Hotel.

The couple said that the hotel was built as a log home in 1840 by Seguin, Texas, co-founder Ranger James Campbell. The structure was later opened as a hotel, and after 1900 became an apartment building. But, the building was eventually deserted after the last owner passed away.

Erin said that Campbell’s ghost often roams the room where a rocking chair is known to rock by itself and the smell of cigar smoke permeates the air. The Ghedis claim that Campbell isn’t the only past resident who never left.

“Everybody is here by choice, or they passed away here, and they all communicate,” Erin said.

It was important to the Ghedis that they restore the building, not remodel. Everything you see there is original.

“Our goal is to save this building and put it back to its natural state, and the ghosts just happened to find us,” Erin said.

The Ghedis said that their renovation contractors has their share of run-ins with the ghosts, some of whom quit after “seeing spirits or feeling their presence.” One such chilling incident involved a man hired to work on the plumbing through a tunnel that ran under the building.

“Somebody tapped him on his shoulder, he looked up and he could see a woman’s face and she called his name,” said Erin. “He runs to his car and just peels off. We had to hire a new tunneler.”

The hotel has been open to Ghost Tours for a while, but starting in August, thrill seekers will have the chance to sleep where the ghosts roam. The Ghedi’s have renovated a suite that will serve as a bed and breakfast where guests will most likely endure one of the most chilling nights of their lives.

“They’ll say your name, they’ll play with your hair, the children like to hug your legs,” said Erin of the ghosts. “That’s how you’ll have an experience here.”

Reservations opened on August 12, 2019, to reserve the suite. For $249 a night, up to four guests can sleep in the fully restored suite that consists of: 2 bedrooms, living room, non-cooking kitchen, full bath with walk in shower, and central heat and air.

For more information on the Magnolia Haunted Hotel, click here.