Have You Forgotten? Darryl Worley Honors Lives Lost 20 Years After 9/11 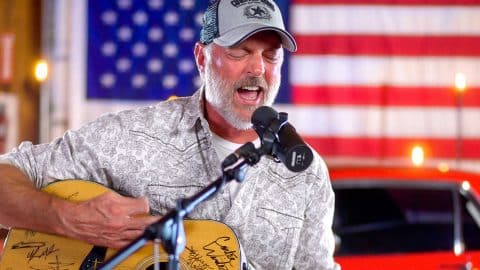 20 years ago, 2,977 people were lost and over 6,000 people injured. 343 FDNY Firefighters, 23 NYPD Officers, 37 PAPD Officers, 8 Emergency Paramedics all gave their lives running into two collapsing skyscrapers to help others.

Through the midst of the terror and the tragedy, many heroes rose to the occasion. September 11, 2001, is a day that America will never forget.

The events of 9/11 inspired country artist Darryl Worley to write a tribute song to those who lost their lives. His powerful lyrics reflect on what took place that day and put to words how many Americans feel.

Worley’s song “Have You Forgotten ?” was released in 2003 as the first single from his album of the same name. With a gut-wrenching message, it reached No. 1 on the Billboard Charts and stayed there for seven weeks.

To pay homage to those who were senselessly killed that day, as well as those who still suffer physical and mental pain, Worley teamed up with Country Rebel to record a video of his tribute song on the 20th anniversary of 9/11.

Watch Worley’s emotional and powerful song “Have You Forgotten?” in the video below.

And to all who lost their lives from the attacks on September 11, 2001 – you are not forgotten.