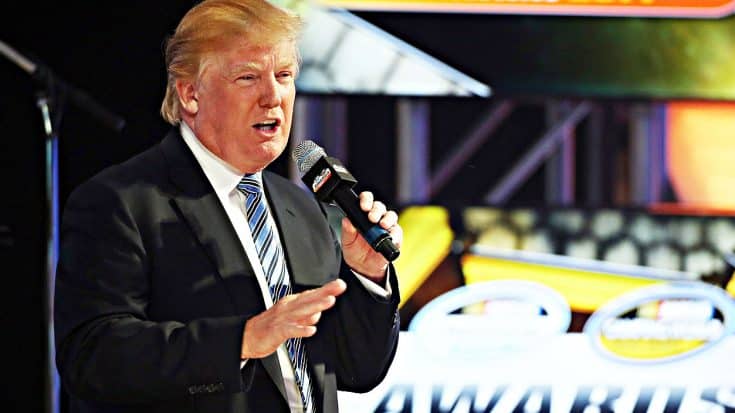 Welcoming a NASCAR team to the White House lawn, President Donald Trump brought up a raging controversy that has plagued almost every single national sports league – except NASCAR.

Trump to Truex after saying 78 car led more than 2,000 laps: “Does it get lonely being in front? Never, right? I had a feeling he might say that.”

Joining Trump on the lawn was the Furniture Row Racing Team and leading driver, Martin Truex Jr. along with his longtime partner, Sherry Pollex. They were invited to the White House to honor Truex for his 2017 championship.

Trump: “I want to take a moment to recognize the amazing Sherry Pollex. She is the love of Martin’s life. Sherry — beautiful. Your determination in the face of adversity has been an inspiration to millions of Americans.”

Trump has long been friendly with NASCAR CEO Brian France – and touted their friendship early on before diving into the controversy…and taking a dig at the NFL.

Trump: “My good friend Brian France is here. He’s doing a fantastic job. I’ve had him as my friend for a long time. We liked each other right from the beginning.”

The President then continued on, pointing out the vast differences in culture among athletes recently. He not-so-subtly compared the drivers of NASCAR to the many NFL players who have been known to kneel during our national anthem.

Bringing up the “anthem controversy” was something he was advised against, but chose to do anyway.

Trump: “One thing I know about NASCAR — they do indeed stand for the playing of the national anthem. Somebody said, ‘Maybe you shouldn’t say that. It’s going to be controversial.’ I said, ‘That’s OK. NASCAR isn’t going to mind it at all.’”

Trump previously had called for NHL players who kneeled during the national anthem to be fired or punished by the league. The players often said their kneeling was in protest of social justice issues.

“At every NASCAR race, you will see thousands of patriotic Americans, from the grandstands to the pit stalls, proudly waving our flag, and roaring with joy at the words ‘start your engines,’ Trump said.

What do you think about President Trump’s comments? Tell us your thoughts below!

Trump: "I will tell you one thing I know about NASCAR, they do indeed stand for the playing of the national anthem." pic.twitter.com/phzyBNusu7