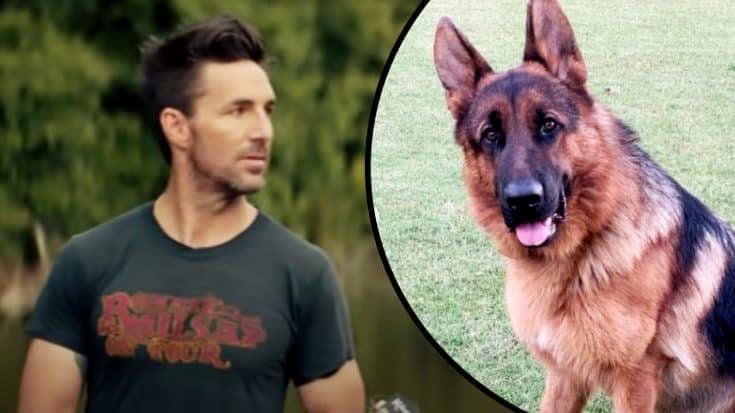 Country singer Jake Owen is in mourning following the unexpected death of one of his dogs.

The “Made for You” singer took to social media on Sunday (July 11) to share some heartbreaking news. He said his youngest German Shepherd, Slash, died suddenly following a medical emergency.

“the drs said his stomach had ‘flipped’ and even with emergency surgery, it wasn’t enough to save him…I didn’t even make it home in time to say goodbye,” he explained.

Owen went on to describe how Slash was “the sweetest most loving dog” he ever had. He said while all of his other dogs love running all over his farm, Slash was always glued to his side.

“He was more like a human than a dog,” Owen said of Slash.

The singer ended his post by saying how hard it is to lose a pet, especially one as beloved as Slash.

“Losing a dog is like losing a family member,” he said. “It was hard for me to even put this post together and share. Go love on your family. Go love on your dogs. See ya up there in Slashy. Love ya buddy.”

Owen received an overwhelming amount of support from his fans and fellow artists:

Chuck Wicks wrote, “So sorry buddy..they’re for sure family members.”

He also received condolences from Big & Rich‘s Big Kenny, Chris Lane, Travis Denning, and many others.

Look below to read Owen’s full post about Slash’s death. He included a slideshow that contains several photos of Slash. He was a beautiful dog.

Our hearts go out to Owen and his family during this sad time. May Slash rest in peace.