Heinz Is Now Selling Mac & Cheese In A Can 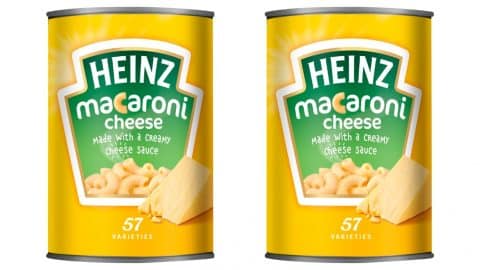 If you’re from the South, you know that macaroni and cheese is very popular. Like many southerners, you may be unsure why Heinz (the same folks who bring you the ketchup you know and love) have put your favorite side dish into – that’s right – a can.

Heinz is selling mac 'n' cheese in a can on Amazon https://t.co/w7T2xmi9Kh pic.twitter.com/7uiZuWardj

The customer reviews on Amazon are currently shaky, as many people are apprehensive to even try mac and cheese that comes from a can.

One Amazon review reads: “For some strange reason i just had to have this. Not to eat either i just leave it on the counter and wonder WHY!!!!!”

Another reviewer who is happy with their purchase said, “It’s the best Mac and cheese in a can!”

So Heinz just announced they are going to start selling canned Mac and Cheese. BLEH! Like I don't know who wanted this!

Would YOU be brave enough to give it a try? – Klein pic.twitter.com/OF05feb25e

According to the product description, “A simple touch or two can make Heinz Macaroni Cheese even tastier. Heinz Macaroni Cheese. Made with a creamy cheese sauce.” There’s no official word on exactly what consumers are supposed to add to the canned dish to make it more appealing to their audience, but one Amazon reviewer named JD said they added Heinz Jalapeño Ketchup to the macaroni and cheese and created their own spicy mac!