Herd of Bison Protect Calf From Aggressive Wolves in Yellowstone

By Megan Dinsdale on January 20, 2023
Advertisement 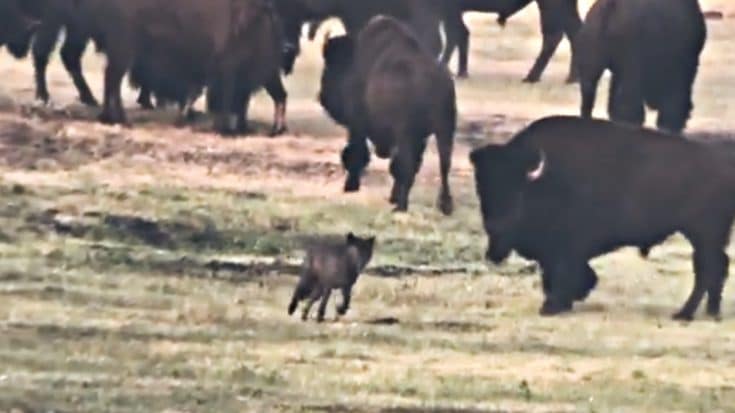 Nature can be vicious, even to the youngest animals. A viral video from Yellowstone Wolf Tracker shows wolves trying to steal a baby bison away from their herd.

While the wolves were quick, thankfully, the calf was able to use its fast feet and quick decision-making skills to fend off the pack as the bison herd worked to step in.

Once the adult bison were able to cut off the wolves, they used their mammoth bodies to protect the little one from harm, and eventually, the wolves decided to move on and look for something else for dinner.

It’s not uncommon to see wolves in Yellowstone National Park. The area is home to almost 100 wolves, and like all animals, they need to eat. Typically, wolves hunt for and eat deer, bison, elk, and moose, and may also hunt smaller animals, including rodents, beavers, and rabbits.

Since wolves typically attack very large prey, they operate in teams to complete their attack. Without swift action from the rest of the herd, it’s likely that the baby bison in the above video would have suffered a very different fate.