By Manly Bryant on August 2, 2022
Advertisement 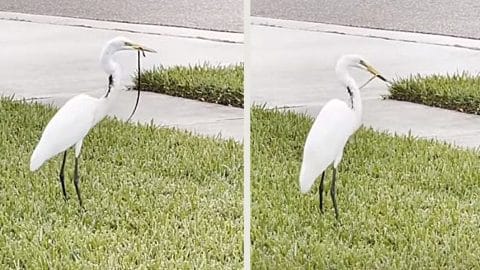 In this insane video posted to YouTube on the Nature Goes Metal page, it showed a heron stuck in an endless cycle of trying to eat a snake to survive and everytime it swallowed the reptile, it slipped through an opening in the side of the birds neck.

Every time the snake was swallowed and dropped out of the hole, the bird tried to eat it again, however, only for it to not make it to the bird’s stomach, but instead, exiting through the hole in its neck every time.

What a terrible position to be in–no matter how much the bird tries to eat, it continues to starve not being able to properly digest its meal.

One can only speculate on how the bird got a hole in its neck in the first place. One theory is that it must have eaten a creature that when the bird tried to swallow it, the animal ate a hole in the bird’s neck to escape.

The bird could have also possibly been shot in the neck by a hunter and it hit the bird just right that it didn’t kill it, but now has a gaping wound. The heron could have also gotten into an altercation with another bird or animal that created the hole.

Who knows really–but what we do know for sure is if the hole didn’t heal up quickly, the bird was destined for a certain and soon death.

Watch The Wild Footage Of The Heron Below