By Manly Bryant on August 9, 2021
Advertisement 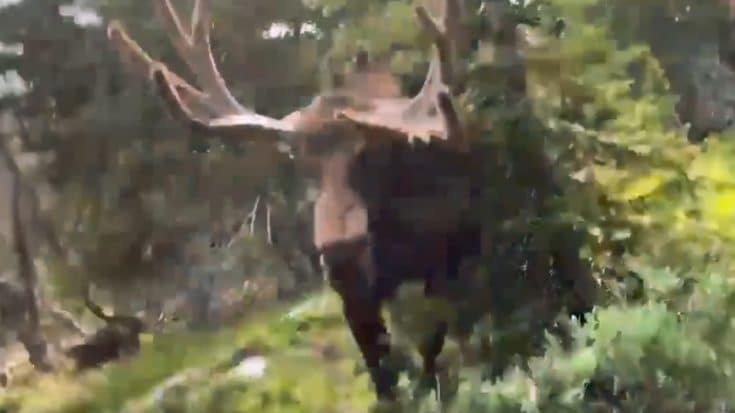 Colorado Parks and Wildlife shared a video on Twitter showing a full-grown male moose charging at a hiker to warn the others about keeping their distance from the wild animals.

According to the post, the incident happened in Clear Creek County as the man who filmed the video was hiking in the wilderness. The hiker said that he came upon the bull by chance as he was walking along a willow bottom trail headed towards a lake.

He filmed the moose from very up close and personal, about 15 feet away, which is what wildlife experts say not to do. According to wildlife experts, the minimum you should allow yourself to be to a moose is 50 feet away to stay safe.

It only took about thirty seconds of filming the video before the bull moose got aggravated at the cameraman and charged at him.

He could have easily died that day but the only thing that saved the hiker from the gigantic animal was a tree that the man was standing behind. Fortunately, the moose’s antlers hit the tree and missed the man and the moose just ran off.

CPW NE Region wrote on Twitter, “This video is an example of being too close to a bull moose and how quickly they can decide to charge on you. Thankfully no injuries occurred. This person managed to get behind a tree and the moose hit that.”

Watch Footage Of The Moose Charging The Hiker Below

This video is an example of being too close to a bull moose and how quickly they can decide to charge on you.

It is from Clear Creek County. The individual just by chance came upon the bull walking along a willow bottom heading towards a lake. pic.twitter.com/Z2usuHpPit

The video below has some tips for how to stay safe in moose country.