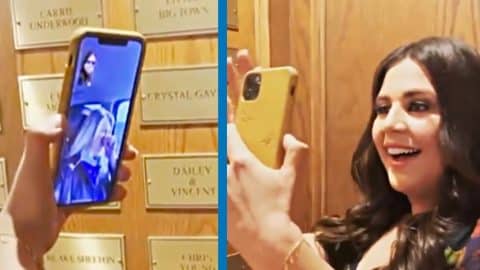 On Thursday night, the hit country group, Lady A, was surprised with an invitation to join the Grand Ole Opry, and it is safe to say that emotions ran high.

Lady A first formed in 2006, and since then, the band has earned 11 No. 1 singles on Billboard. Members Hillary Scott, Charles Kelly, and Dave Haywood have earned numerous awards over their years in country music, but an invite to join the Grand Ole Opry is sure to be one of their favorite milestones.

On Instagram, Scott shared the moment she told her mother, Linda Davis, about the Opry invitation. In the video, the country singer played coy with the news. Scott spoke casually with her mother before finally revealing that Lady A has a golden plaque alongside the other Opry members.

“When my mom left East Texas when she was young, people would ask why she was headed to Nashville and she would say, “to play on the Grand Ole Opry!” Getting to make this call today was priceless,” Scott wrote on her Instagram.

Upon hearing the news, Davis instantly became emotional. Scott also had to wipe away tears as her mother processed the good news. Later on Facebook, Davis wrote:

“OK…..This is the best news!! Lang and Me and Rylee are so proud we can hardly contain our emotions!! In fact, my tears just about won’t stop flowing with joy!! Just had to share. Congratulations Hillary, Dave & Charles.”

Watch Scott share the news in the full video below.

For more on Lady A’s new music, check out the next video!