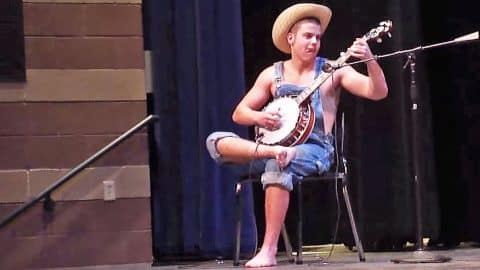 A cocky, popular student walked out on stage in nothing but overalls, a cowboy hat and his banjo. Presumably the class clown, he said a few words before strumming his banjo.

Between lines, the audience laughed and it seems like everyone thinks his “talent” a joke. He even took some dip out of a can to make it seem like he was chewing tobacco, too.

But as soon as he started strumming his banjo, he stunned the entire audience!

A Talent No One Knew About

For his high school’s talent show, Joel, the hillbilly banjo player, really showed off his talent, and impressed his peers with a remarkable performance! Playing “Cripple Creek” and “Foggy Mountain Breakdown,” he really showed off his pickin’ skills and showcased a talent none of his friends probably knew he had.

You can tell by the crowd’s reaction just how impressed they were with his hidden talent.

A Winning Performance In Our Eyes

He clearly won the audience over, who clapped along and cheered loudly at the end of his performance. Who knows if he won, but he definitely put his best foot forward!