By Miranda Raye on April 22, 2019
Advertisement 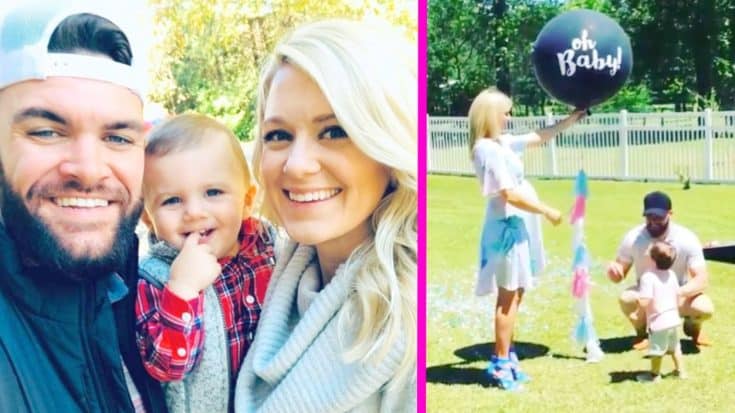 Dylan Scott and his wife Blair are true high school sweethearts, having been together since Dylan was 15. The two finally tied the knot in the summer of 2016, the same weekend that Dylan released his future number one hit, “My Girl.”

Of course, the song was inspired by his longtime relationship with Blair.

The two wasted no time in starting a family, and announced in the summer of 2017 that they were expecting their first child.

They later revealed they were having a baby boy at a gender reveal party. Dylan and Blair shot mini cannons packed full of confetti, and were overjoyed when blue shreds of paper filled the air.

Blair and I are over the moon excited about our little BOY!!

If anyone was wondering when Dylan and Blair would be welcoming another little one into their brood, they didn’t have to wait for long. In March, the couple had their 15-month-old son help them reveal that he’s going to be a big brother!

The three family members donned matching black leather jackets and displayed balloons spelling out “Baby” to share that Blair is expecting baby #2! The new addition is set to join the family in September.

Secret is out… we are so excited to announce baby number ✌? is on its way!? #september2019 ?: @blackmountainweddings

Dylan and Blair kept the balloon theme going when it came time to reveal the gender of their new baby. Just like they did with Beckett, the couple hosted a gender reveal party so they could share the happy news with all of their loved ones at the same time.

Also like they did with Beckett, the pair used colored confetti for their reveal. Dylan and Blair brought out a gigantic black balloon with the words “oh baby!” and it was packed full of the confetti that would reveal if they were having a boy or a girl.

Dylan popped the balloon while Blair held on to the string, but she quickly let go and started jumping for joy when she saw the pink confetti showering down around her. It’s a girl!

It’s clear that Dylan and Blair are both thrilled to welcome their new daughter into the world. We can’t wait to see her when she makes her grand debut!

Now the couple has a “my girl” and a “my boy!” How perfect is that?