By Manly Bryant on October 29, 2020
Advertisement 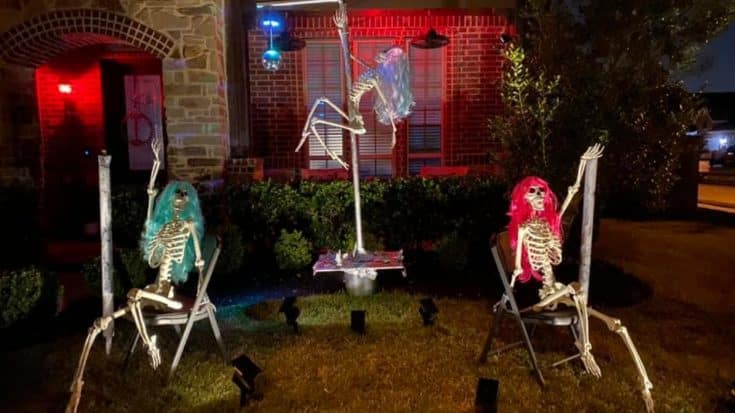 Angela Nava from Richmond, Texas has gotten herself into a little bit of trouble with the Home Owners Association after creating a “skeleton strip club” in her front yard with her Halloween decorations. It even had bouncers checking IDs of other skeletons.

“The HOA has given her 30 days to take it down. But Halloween is this weekend,” ABC13 Houston reported.

She changes the positions of the props around 8pm every night and many neighbors gather around in her yard during that time to watch and see what she creates next.

“It’s modeled after an adult club,” Angela told ABC13. “We just really had a good time changing the scene up every night. Every night, we change the positions of the skeletons, and it’s really been just a great creative outlet for me.”

Angela shared a few pictures of the Holloween decorations on her Facebook account. One of the pictures showed a skeleton with long blue hair hanging from a pole while two other skeleton props with orange and green hair were positioned as if they were dancing on chairs.

“We’ve all been cooped up and it’s been just a terrible year,” she added. “We’ve just decided if this brings a little bit of joy and a little bit of smiles to someone, then we’re doing everything right.”

According to Angela, the neighbors loved it. However, HOA was not impressed with her creativity and quickly issued her a letter to take it down.

“So far, up until this letter that I received last night, everybody who’s come by has been incredibly supportive. My neighbors love it,” she said.

Halloween is within a few days and she’s got a month to remove the decorations or they will… actually, they did not tell her what they would do if she didn’t take them down. Regardless, she says she’s going to continue the fun and leave them up until Halloween is over.