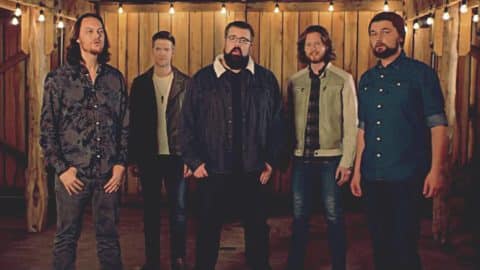 In 2018, it didn’t take long before you would hear Kane Brown‘s “Heaven” playing on the radio. Released as a single in November 2017, “Heaven” remained one of the hottest country songs throughout the rest of that year and into the next.

Written by Blake Anthony Carter, Matthew McGinn, and Lindsay Rimes, “Heaven” has the narrator singing about how he always hears people talking about how they “just can’t wait” to get to heaven after hearing how beautiful it is.

But to the narrator, he says he “ain’t convinced” of its beauty when he thinks of what it’s like to lay in bed with the woman he loves. The sexy song instantly caught Brown’s attention, as it reminded him of his fiancée.

A Cappella Group Home Free Brings On The Romance

With that personal connection in mind, Brown was able to make a recording that is just as steamy as it is sweet. As one of the leading country songs of 2018, others jumped on the wagon to offer up their own renditions.

One “Heaven” cover comes from everyone’s favorite country a cappella group, Home Free. The group put together a music video for their version of the song, and it’s guaranteed to leave a few of y’all weak in the knees.

Home Free’s covers of country love songs have typically been some of their most popular videos. Just take the success of their “Your Man” and “Yours” covers as a few examples. So you know that their version of “Heaven” is definitely a good one.

This Video Will Leave You Feeling Faint…

If you’ve seen Brown’s video for the song, you know that he opted to take a simplistic approach with it. The video shows him singing in front of a microphone while candles and twinkling lights fill the empty room around him.

Home Free offered an additional nod to Brown by styling their video in a similar way. Their video places the group in an outdoor wooden structure with a few white lights hung near the ceiling.

The romantic setting enhanced the group’s performance of the song, which was smooth as silk. Multiple members took turns singing the lead, and each solo will bring a whole new wave of shivers up your spine.

If you weren’t already in love with Home Free, you’re sure to be after you watch this video. Talk about a “heavenly” sound!