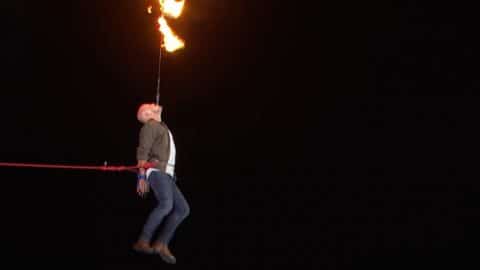 A daredevil stuntman on the new America’s Got Talent: Extreme suffered critical injuries in a stunt-gone-wrong yesterday that had cast and crew thinking he died.

Jonathan Goodwin, a renowned stunt performer and daredevil, was suspended 70 feet in the air trapped in a straitjacket during a recent taping when he suffered horrific injuries as the stunt went wrong.

“Goodwin was suspended 70 feet in the air in a straightjacket hanging by his feet from a wire,” production crew told TMZ. “Two cars were suspended on either side of him…swinging back and forth.”

Apparently, the act was supposed to have Goodwin free himself from the straitjacket (likely locked) and wire suspension before falling onto an inflatable mattress laid out beneath him. He had to do this in a quick enough time to avoid being crushed by the swinging cars.

It’s unknown what exactly caused the stunt to fail but TMZ explains that the cars swung together and crushed Goodwin in the middle. The sheer force of the impact caused the cars to ignite and both exploded into heaps of fiery wreckage.

Goodwin fell to the ground and struck his head on the stage, lying there lifeless and unresponsive. Witnesses say they believed him to be dead immediately.