For 14 Years, Horse Takes Walk Alone Every Day – And Here’s Why

By Manly Bryant on April 19, 2019
Advertisement 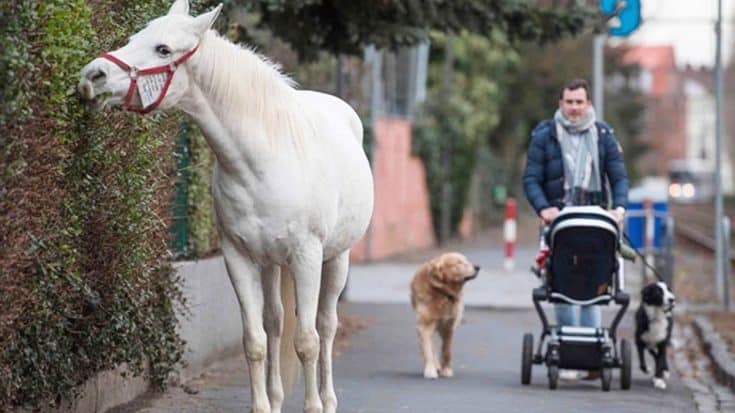 We’ve heard of stray dogs and cats running loose in the streets, but have you ever seen a horse walking in the city by itself? There’s one such horse named Jenny the Arabian mare who, on her own, walks the same path every day through the city of Frankfurt, Germany.

To the people who know her it’s quite normal to see Jenny walking slowly with nobody around, but to strangers seeing her for the first time it can be kind of shocking. To keep everyone who encounters her informed, her owner hooked a note to her halter that says in German:

“My name is Jenny. I didn’t run away, I’m just walking. Thank you!”

According to BoredPanda.com, Jenny has been walking this same route for 14 years now. Her owner, a 79-year-old man, Werner Weischedel, is not able to ride her anymore. So every morning he opens her gate, lets her out, and she trots along the same path they always walked together.

How The Community Feels About It

She walks that path 8 times a day before going back home for her afternoon lunch. The residents of Frankfurt are used to her, but sometimes newcomers call the local police thinking she’s a runaway. Of course at this point the police are fully aware of her roaming on her own and tell the frightened folks that she’s been approved to do so. They say Jenny hasn’t had one bad incident in the 14 years she’s been walking alone.

Jenny has been doing this so long she’s made many friends. One friend is the driver of the tram where she stops to get her daily petting. However there’s some people in the community who don’t agree with her walking alone. Some say the owner is negligent when it comes to her safety and for the safety of the people she encounters along her walk.

It would be a nicer world if every town had a Jenny ? https://t.co/YpKaMkeHZy

Super interesting story, huh, something you don’t hear about every day. What do you think about all this? You can watch the video below but it’s in german so you may not understand what they say. However you can at-least watch her walk around.