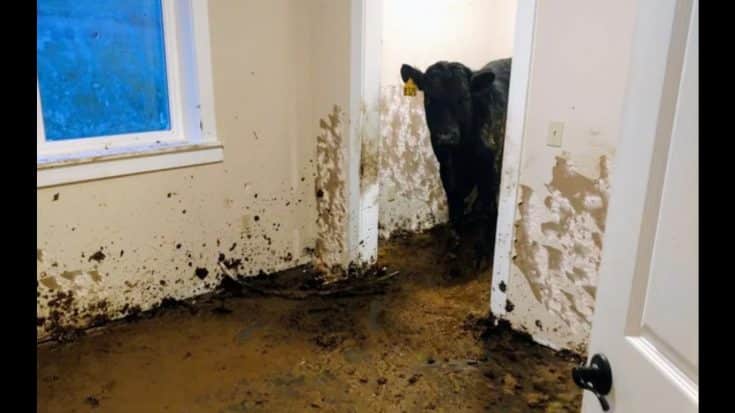 You might start to say “only in Texas” but this particular family built their home of choice in Montana…and as you might guess, cows outnumber people in that state, so if you leave your brand new house alone too long you might be risking it to those bovines.

According to an article by ABC/Fox Montana, a Reddit user shared the calamity of a tale with the folks on the “Well That Sucks” subreddit – a kind of group for things that, well, suck.

How this devious cow managed to make his way into this family’s new construction home is beyond most – but the poster explained the scenario after his initial post started to go viral and people were asking questions.

“1.house is on my aunt’s property. We currently live in Washington and were planning to move over at the end of the year. We assumed she was going down every now and again to check on the house, guess she wasn’t. Cattle guy has a lot of acreage and looked for his cows, even filed a report for stolen cattle. He looked in our shed but not in the house because he thought someone was living there.

2. There was a bad storm in the town I think around late April and we think the cows were looking for coverage. They either got in by nudging a lever door or the wind might have blown the door open. We’re not sure.

3. Insurance has been contacted but I’m not sure about the outcome because my stepdad is trying to deal with it directly with cattle guy and trying to work something out, and no, we don’t have Farmers insurance.

4. Cattle man has already contacted contractors to come out and appraise house, we have all his info but unfortunately, we are back in Washington at this time, so it’s going to be a process.

5.I’m going to become a vegetarian to please the cow gods so that this will never happen again. “

Apparently, this isn’t the first time something has happened to people in Montana – as one Facebook follower explained that they had to endure the same thing!

Local radio show The Big J Show posted the initial photo to their Facebook page and the story started taking off like wildfire – and in just a couple of days has already gotten more than 23,000 shares!

Check out the post below – and let us know what you would do in this “udderly” awful situation!

From Reddit: "This big guy and three of his friends got into our newly built Montana house and proceeded to live there for a month before being found."Ouch. How do you recover from that?