How Blake & Gwen Celebrated Their 1st Christmas As Husband & Wife

By Miranda Raye on December 29, 2021
Advertisement 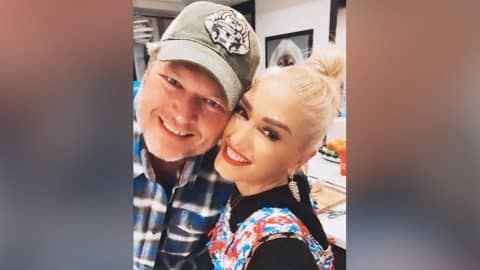 Blake Shelton and Gwen Stefani have celebrated many Christmases together by now. They have formed their own traditions over the years, which they spoke about on Apple Music’s holiday special From Apple Music With Love.

“We go out of our way to find a recipe. And it’s always got to be the most difficult thing you can imagine…” Blake said. They try a new “difficult” recipe each year, which Gwen appreciates.

“…thank you for pushing me, pushing me to find new creative ways to feed our family,” Gwen said to Blake.

Another tradition the couple follows is one that was started by Gwen’s dad, Dennis. They make a wall of wrapping paper for Gwen’s three sons (Kingston, Zuma, and Apollo) to run through on Christmas morning before they see their presents under the tree.

“I’m not kidding when I talk about how serious this is to the Stefanis…I’ve never known you to take anything more serious when it comes to a party type thing than this wrapping paper wall that they run through,” Blake said.

This year was Blake and Gwen’s first time celebrating Christmas as husband and wife. Gwen offered a glimpse at their first married Christmas through a series of videos she shared on her Instagram Story.

The videos showed Blake and Gwen participating in another one of their Christmas traditions. Every year, the couple attempts to make a timpano pasta dome. They failed to pull off the recipe last year (2020), so they felt the pressure to make it perfect this time around.

Gwen’s videos show Blake successfully flipping both of the pasta domes. She joked as they prepared to cut into the domes, saying, “The fifth annual cutting of the timpano pasta dome — Lord hear our prayer!”

Thankfully, the domes turned out well!

The house was accented with a bunch of colorful candy and tiny presents in metallic wrapping paper.

It looks like Blake and Gwen had a lovely first Christmas as husband and wife!

If Blake and Gwen played Christmas music at their family’s gathering, there was at least one song that had to be on their playlist. The couple released a duet a few years ago titled “You Make It Feel Like Christmas,” and it’s now a holiday staple. Watch its music video below.