By Manly Bryant on June 2, 2021
Advertisement 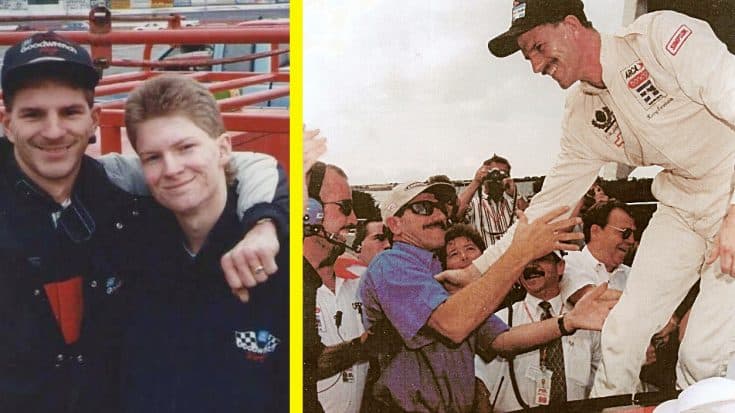 The eldest son of Dale Earnhardt Sr. sat down with his brother in an episode of the Dale Jr. Download and opened up about his early years – and how he went on for a decade without knowing who his father truly was.

Kerry was born in 1969 to Latane Brown and Dale Earnhardt Sr. Brown was the first wife of Earnhardt and he was just 18 at the time of Kerry’s birth. The pair divorced when Kerry was only a year old and after that, Kerry knew almost nothing about his biological father for more than a decade.

In 2000 Dale Earnhardt Jr, Dale Earnhardt, and Kerry Earnhardt competed together in 2000 Pepsi 400 Presented by Meijer at Michigan. The only time all 3 Earnhardts would compete together.

In the May 27, 2021 episode of the Dale Jr. Download, Kerry Earnhardt and his half-brother, Dale Earnhardt Jr. discuss how they met for the first time, and how different their lives were growing up.

As the show teases in the show descriptor:

“The eldest Earnhardt details his family situation from a young age when Dale Sr. left the picture and what life was like growing up with no knowledge of his other family.”

“Hear how he found out about his Earnhardt side, how he met his grandmother, and why it took so long to meet his dad in person. Find out how long it took Kerry to build up the courage to go out back of Mammaw’s house and greet his dad. Hear how the interaction went and what happened at the front door when Kerry went to see his dad and meet Dale and Kelley for the first time.”

See the full episode below.