By Manly Bryant on July 2, 2019
Advertisement 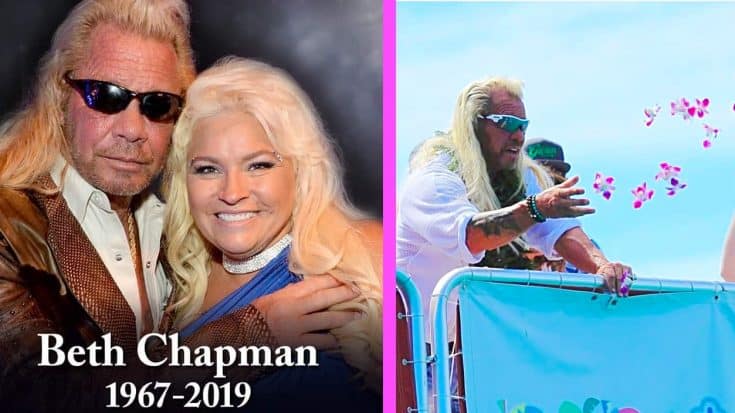 To honor his late wife and beloved partner in fighting crime, Dog The Bounty Hunter and his family – along with a generous amount of public supporters – came together on the beach of Hawaii to honor their treasured matriarch in a ceremony that featured many traditional Hawaiian elements.

Duane “Dog” Chapman and his wife Beth carved out their own niche in the world of reality television programming and have amassed quite the fan base. Even after their 8-year run on A&E came to a close, folks wanted to see more of this iconic pair in action, and CMT inked a spin-off deal with them for a series called Dog and Beth: On the Hunt!

But on June 22nd, 2019, Dog reached out to fans requesting they pray for Beth as she was struggling. Later, it was revealed she was put into a medically-induced coma.

Just days after that news broke and tributes flooded the internet in an outpouring of support for her, she passed away following an unexpected downturn in her battle with throat cancer.

We are deeply saddened by the tragic news that @MrsdogC lost her battle with cancer today. She was an exceptional woman, all of us at #WGNAmerica will miss her tremendously. Our thoughts and prayers are with @DogBountyHunter, her family, loved ones and millions of fans. pic.twitter.com/18YQBrHWec

After her tragic passing, the family released information about the upcoming memorial services they had planned for her in both Hawaii and Colorado. The Hawaiian service was set to occur on June 29th, 2019 and was open to the public beginning at 2 pm in Waikiki at Fort DeRussy Beach.

Photos cropping up on social media show that the ceremony was incredibly beautiful and went off without a hitch – even as a massive crowd gathered to send Beth off into the crystal clear waters for her final voyage.

She wanted it Hawaiian style – and her family gave her exactly that. It was such a beautiful moment, however somber.

Watch some of the videos of her final Hawaiian send off below.

Rest in peace, Beth – you will never be forgotten.