How Jason Aldean Is Helping Wife Brittany Through Her Second Pregnancy 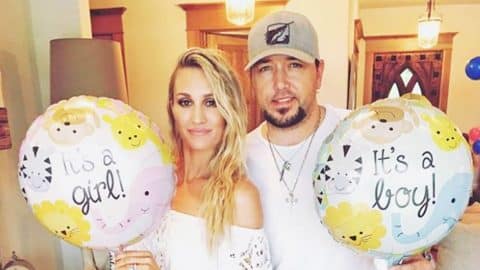 Country star Jason Aldean is about to have a full house!

Already dad to daughters Keely and Kendyl from his first marriage, the “You Make It Easy” singer and his wife Brittany welcomed a son, Memphis, into the world on December 1, 2017. Brittany called the day, “hands down the happiest day of my life.”

Memphis Aldean Williams💙 Born today at 1:29PM weighing 9lbs 5oz 🙈🙌🏼 There are truly no words for the love we feel🙏🏼 Thanks for the amazing support @jasonaldean and enduring all the hand squeezing and nail digging🤗 … HANDS DOWN THE HAPPIEST DAY OF MY LIFE!!!

Just seven months after the birth of Memphis, Jason and Brittany revealed that they are expecting another child together – and they announced it in the cutest way ever! They dressed Memphis in a onesie with “Big Brother” written on it, and put him in the most adorable pose. Jason wrote, “Sup everybody……. guess who is gonna be a BIG brother!”

To everyone’s surprise, the married couple of three years actually planned on having babies so close together, both with the help of in-vitro fertilization.

Apparently, this pregnancy is much different than Brittany’s first.

Jason explained to People, “With my son, Brittany didn’t have any sickness at all, but with [this] baby she’s been pretty sick for the last few weeks, so we’ll see.”

Well, it’s been a couple weeks since that interview and it seems things haven’t gotten much better for the soon-to-be mom of two. In a new interview with Taste of Country, Jason revealed that Brittany needs his help a little more this time around, including holding her hair back when she gets sick.

Luckily, he thinks she may be turning a corner in the morning sickness department! Check out his interview in the video below.