Hunter Shoots 13-Point Deer, Then Realizes It’s Not A Buck, But A Doe

By Manly Bryant on December 12, 2019
Advertisement 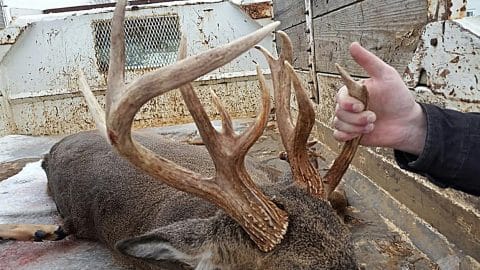 Deer hunter Michael Wanta from Rosholt, Wisconsin fell into utter confusion when he and his father were participating in the annual gun-deer season on November 29th.

The Story Of What Happened

The confusion happened when the two men were sitting at their hunting spot that stood over a big open field and they spotted a group of deer walking into the grass. One of the deer had some nice antlers on it, so Michael looked down his scope and took the shot.

He hit the 13-point deer and the guys began to walk over to where it fell. As they got closer to the deer they started to notice how weird the antlers looked, then were completely blown away when they realized this wasn’t a buck at all, it was a female deer with antlers!

Reaching Out To The Department of Natural Resources

The Wisconsin Department of Natural Resources doesn’t require people to report situations like this and Lesa Kardash, a wildlife biologist said it’s hard to know how rare it is for hunters to shoot does with antlers.

According to Lesa, the doe could have had super high levels of testosterone causing it to grow the antlers. However, if that’s the case the antlers are usually fuzzy with small hairs. Then again it could have just naturally been born with both male and female features and possibly hiding multiple reproductive organs within its body.

Michael ended up taking deer to the taxidermy a who then said he didn’t discover any unusual organs or extra body parts when he was field dressing the animal. So no one is really sure why the deer was like this.

Check Out More Pictures Of The Deer Below