By Manly Bryant on March 26, 2021
Advertisement 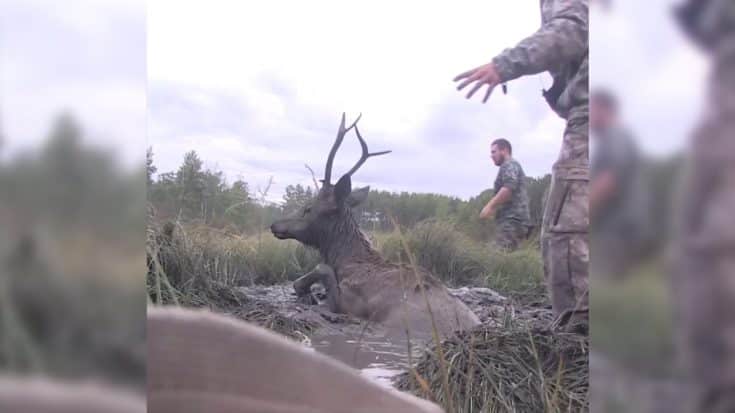 Two hunters, Dana and Daniel, were walking in the forest with their backpack and gear when they stumbled upon a bull elk stuck in the mud. It was cold, the elk was tired, and it looked like it was going to die there.

“We come up here into our spot this morning and there was a bull elk, we could see its antlers on top of the hill. He was buried and stuck here in this mud hole. Young bull… and we can’t leave him like that,”  Dana said on Fatal Impact Outdoors.

The men could have either, keep walking, stay safe and let nature take its course, or try to get in there with the wild animal in an attempt to set it free and potentially risk getting injured or killed. The men did what they felt was best – they decided to rescue it.

With not much to work with being out in the middle of the forest, Dana got behind the elk and tried to push it while Daniel grabbed a large log to place under it to use as leverage to lift the animal.

Unfortunately, this attempt didn’t work, and the elk sunk deeper in the mud. At this point, Dana grabbed some paracord and wrapped it around the elk’s antlers. He pulled on the cord while Daniel continued to lift him with the log.

Through the teamwork between the elk and hunters, they were finally able to get it out of the mud pit and onto solid ground. Even though the elk was exhausted, the moment it was out, it stood straight up and took off running back into the forest while the tired, but satisfied men ended the video with a few words of their own.

“It took us over 45 minutes and every ounce of strength we had… but we got him out… and he’ll survive.”