Idiot Gets Mauled By Bear After Sneaking Up & Kicking It 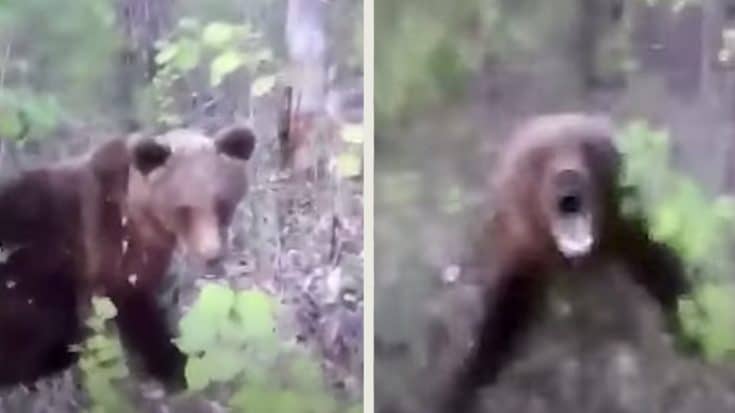 A man in Russia filmed himself getting mauled by a young brown bear after sneaking up to the predatorial beast and kicking it in the behind.

The man was said to have been stalking the bear in a secluded forest located in the Kamchatka region of the Russian Far East when the attack happened.

Video footage showed him filming the bear who seemed to be just waking up from a nap or was low on energy and was walking a bit funny.

The man filming must have thought it was safe to follow the creature due to its lethargic behavior. The bear noticed the man and attempted to get away from him by walking in the other direction, but the Russian decided to follow it.

For some idiotic reason, the man walks right up on the bear and kicks it in the back causing the animal to turn around and take a good look at its harasser.

The man realizing he had made a stupid decision starts to back off but by that time the bear’s natural instinct kicked in and it roared at the man.

Right after roaring, it started to charge at the man and knocked him down to the ground while biting him on the hand. The bear immediately ran away after the attack and so did the man when he got to his feet.

He actually dropped his camera during the process of getting mauled but later came back for it after he knew the bear had run off.

In the video, you can hear the man say in translated Russian, “It bit through my hand. It [explicit] attacked me!”

Well, dude…what did you expect?

In America, wildlife authorities say if you see a bear in the wild, to stay a minimum of 100 yards away at all times and never ever approach one to film or take a photo.

Go ahead now and take a look at the video below to see the incident for yourself.